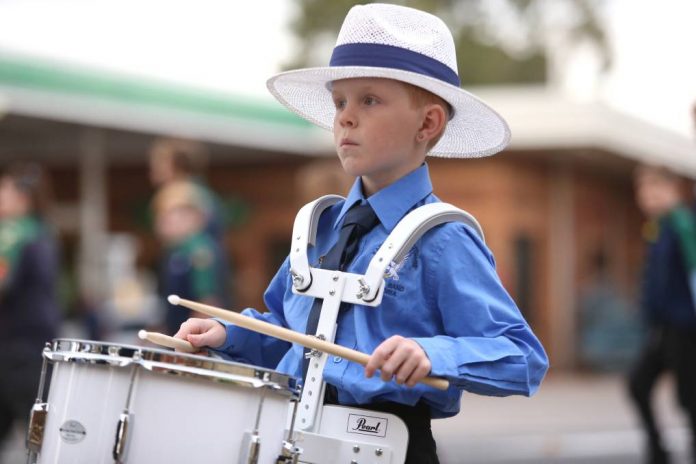 ESC students Lukas, Len and Laahnie interviewed Charlie, the youngest
Eaglehawk Brass Band member, to find out about his involvement in      this musical group that has been going strong since 1884.

What instruments do you play?
“I play the drum kit, tambourine, cabasa, Timpani, bass drum, tam tam, glockenspiel, and lots of other percussion instruments”.

Why did you join the band?
“I joined the brass band when I was about eight years old. Eight of my family members were in the band so I thought it would be pretty fun to join and do an activity outside of school”.

How many people are in the band and what do you enjoy about it?
“Currently there are approximately thirty band members. I like talking to all the musicians and making friends with new people”.

How much practice do you have to do each week?
“Tuesday nights we practice at the band hall in Eaglehawk and when a competition is coming up we also have extra practice days on Sundays. I also practice at home on my electric drum kit as well”.

Where does the brass band play?
The band play at many special occasions such as Australia Day, Anzac Day, Many different parades and Christmas Carols. We play out at Ballarat once a year as well.

Do you only play in Eaglehawk?
“The band plays all over the Bendigo region. I went to the National Championships in Melbourne during 2018 and then to Brisbane for the Nationals in 2019 and won second place. A funny moment we will never forget is when the band’s conductor, Ken Wellard accidently broke our trophy. Apparently leaving a glass trophy on a music stand isn’t the greatest of ideas”.

What sort of music do you play and what is your favourite piece?
“The band plays traditional marches, hymns and lots of popular pieces such as Lady Gaga and AC/DC songs.  We even played a TiK Tok piece that went viral called The Wellerman”.

My favourite piece to play is called “Viking Age” It is a 12-minute piece of music that has many different parts to it and it is very cool. It is special because it’s a type of music that also tells a story”.

Word is you almost went viral on Facebook playing a solo piece at Ulumbarra Theatre this year?
“We played the Eternal Triangle and each time we entered a new section of the piece I would get out a bigger triangle. The triangles kept getting bigger and bigger until I had to get earmuffs for that because it was very loud. We got about 8000 likes and reposts from New Zealand and even an African Band reposted it”.

What is your favourite memory of being in the band?
“My favourite part is when we get to travel and play in different places which is why I can’t wait until we can go back to normal”.

What is your advice for anyone that may be thinking of joining
a brass band?
“It is a really fun thing to do and if you are not quite up there yet with the instruments then choose drums because it is easy and can be learned quickly. If you want to progress to another instrument, you can do that as well. I do drum lessons at my school which also is helping”.