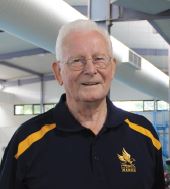 For some people volunteering is about giving, but for the likes of Wally Stables it is a way of living.

“Leon Scott came in and I thought he was looking for a piper as I play bagpipes… then he said… you’ve been nominated for the Eaglehawk Citizen of the Year.”

| was flabbergasted and- dumb founded. Then he said “do you accept?”

It has been a lifelong contribution spanning several decades. At the age of 88, Wally reminisced about the past 52 years as a volunteer.

“As I walked through the gate, one of the officials welcomed me, took me up to the too end of the pool and handed me a stopwatch.. I looked at it and thought, what am I supposed to do with this?

“| have loved seeing kids enjoying swimming, getting placed and advancing onto higher levels”

His story starts way back in the 1960s when he first got involved with swimming after his children joined the Eaglehawk Swimming Club. They asked him to come down and see themswim at the trials one Sunday morning.

Wally was invited to try his hand at time keeping whilst watching the children. He had no experience with swimming, although he could swim, he had no idea what a swimming club actually did. “I seemed to like it- the company and the people involved.”

“Tt’s really fulfilling. You’ve done something for somebody’

This was the beginning of an epic journey that saw a lifetime of dedication and tireless commitment to the development of young people.

These days, Wally volunteers for three nights a week and retirement is not on the horizon.

“| will continue, possibly to the day that | die. There’s no end in sight..not at the moment..net whilst I’m able to do it.”

“A lot of children who come to swim reckon they can swim, but they haven’t got the techniques or the breathing. If you can’t breathe in the water, you’ve got no hope. You’ve got to be able to blow bubblesand turn your head and breathe. Technique is a great thing for swimmers.

“It’s really fulfilling. You’ve done something for some body.”

“| like doing it and I get on well with the kids”

He still doesn’t know who nominated him for Citizen of the Year!!