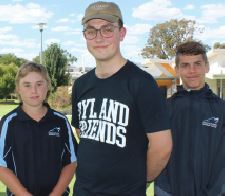 Pictured above: Dylan with ESC students Daniel and Harley

Dylan Gaffee was nominated for Junior Citizen of the Year by the Eaglehawk Cricket Club who wanted to acknowledge his service and involvement over many years.

“| see it as an honour, winning the award, but at the same time, I don’t see that I’ve done anything extra special’

The 24 year old is a keen cricketer to put it mildly.
He loves his cricket. In fact, Dylan and his parents have been heavily involved with the club both on and off the field dating back to around 2006.

Dylan Gaffee is an avid cricketer and also a passionate promoter of men’s mental health.

But there’s another side to Dylan – a caring and passionate person who has devoted himself to the awareness and promotion of men’s mental health and well being.

“Mental health is a passion of mine’

Dylan recently graduated with a Bachelor of Education majoring in History and throughout his time at university, he managed to keep promoting mental health to the members of the cricket club.

“You hear a lot of sports people saying now they wished that people in their club talked about their mental health. Instead of being one of those people that said, I wish, I thought, I will do something,”

According to Dylan, it seems to be working. There’s a lot of positive talking between all the boys about mental health and they’re more comfortable now about saying “lm not alright’ instead of hiding it from everyone.

Dylan views it as more of a promotional role. If one of the boys needs help, Dylan makes himself available. He is there for a friendly chat at their
time of need and doesn’t want them sitting in silence. And the boys know that he’s there if they need him. Dylan also assists by finding and
recommending external agencies, and puts the boys in touch with them. He participated in a suicide awareness workshop at Eaglehawk Football Club and has started some work with Headspace.

“My advice to young people is to be yourself because everyone else is taken. Don’t think like you’ve got to be like your best mates. If you want to be anyone…be yourself.

Don’t care what other people think’

“I know it’s easier said than done. If you just act the way that you want to act and be the person you want to be, you will find that life is a lot more
enjoyable than you trying to be like the person next to you.”