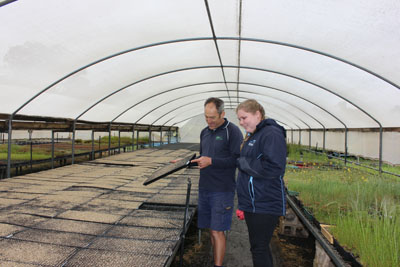 On a wet and drizzly day in mid October, ESC students Mikaela, Lily and KJ visited Ken Wellard, owner and manager of Neangar Nursery in McClelland Drive, Eaglehawk to find out what goes on in a plant nursery.

Ken is a nurseryman by trade, just like a builder or an electrician. He spent four years at Homesglen College in Oakleigh learning all about plants. “I left school when I was in Year 11. I’d done a science course at White Hills Tech.
before doing an apprenticeship as a nurseryman. I then worked for about 10 years at Purtill’s who specialised in seedlings”.

Neangar Nursery specialises in the broad acre application of indigenous and native plants. So anything that you see in the bush is basically what is grown in the nursery. They also grow Australian natives plus a few things that are exotic that don’t come from Australia.

The nursery’s main business is to grow the plants and sell them. Ken also offers advice to people about species selection and puts them into contact with contractors.

We grow about half a million plants per year

He has a wealth of knowledge about forestry, ecology, biology, waterways, animals, insects, and fungi.

The nursery supplies plants to organisations for a variety of
reasons – salinity projects, biodetention basins in subdivisions, landscaping
projects, windbreaks and wildlife corridors.

They sell plants to organisations such as landcare groups, schools, government departments and big businesses. Ken’s role is to grow the seedlings and help people to select the right ones for the job.

“We grow about half a million plants per year – a lot of eucalypts, gum trees, wattles, acacias and grasses. So we have a bit of everything for everyone”.
At the turn of the century Ken decided he needed a change of direction so his family moved to Hamilton in the Western District of the state for 3 years. In Hamilton he managed a forestry nursery that involved growing Tasmanian bluegums. About 8 million were grown each year for 3 years – it was huge. At the end of 2002 Ken decided that it was time to start his own business and return to Eaglehawk which is home (his wife’s family have lived in the Borough for six generations). That was about 17 years ago.

Ken has a range of clients. There’s lots of commercial work for companies like Parks Victoria who work with our local bush. The City of Greater Bendigo is another of Ken’s clients where he supplies plants for things such as the National Tree Day and blocks of land that need revegetating.

Ken also sells plants to the North Central Catchment Management Authority who look after every river in central Victoria.

“They pull out willows and then we sell them plants to replace the willows”.

Private people like farmers who need plants for windbreaks are also clients. “We sell plants for the sides of highways. We sell plants to Neangar Park Golf course, and all the primary schools in Bendigo”.

When visited Ken, the nursery was in the production stage sowing plants from seeds. The first stage is to boil the seeds. About 50 to 60 different types of wattle are grown from the seeds that are boiled.

Our parting question to Ken: What is your favourite plant?

Melaleuca wilsonii (Violet Honey Myrtle) It has a fascinating and beautiful flower, is drought tolerant and lives for up to 80 years.