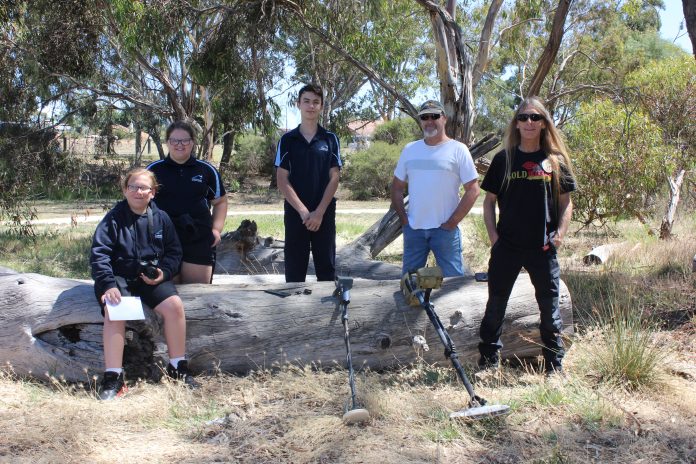 Darby Lee is a local Eaglehawk gold prospecting enthusiast. He runs Gold Finger Historic Tours and takes people out on tours to learn how to prospect for gold! The team met with him and his friend Stew for a chat all about prospecting.

Darby believes there’s nothing better than going out to search for some gold. It is one of the best hobbies you can have: ‘It gets you out and about for a few hours, you get some exercise, you’re able to breathe some fresh air and get to experience God’s country… while being able to find some gold
– it doesn’t get any better than that’.

‘I begun prospecting when I was 8 years old. I was at the Tarnagulla mine where I learnt how to pan and how to run a sluice’.

You can find all sorts of things when you’re out prospecting. Old relics, bottle caps, musket bullets, coins and buttons! Buttons are really
interesting to discover, as you can trace them back to their origins – some can even be traced back to England from the 1850s!

‘When I was in high school, we would go out camping and pan for the whole weekend. I was just a teenager and I was finding gold!’

‘My great-great-great-grand-father was a Chinese man who came over in 1850 for the gold rush, so I have had generations of miners in my family all the way up until the Central Deborah Gold Mine which was closed in 1954. My grandfather was the last miner there to clock off’.

‘Perseverance and patience are key in successfully prospecting. It’s like fishing, you can go out and not find anything. But that doesn’t stop us from going back out another day!’ The technique shown on most television programs is all wrong. You must ‘vacuum the ground’ with the prospector.
After hearing a beep, you remove the top soil and try again. If there’s still a reading, then it’s time to dig!

Darby informed us that there is still a lot of opportunities to find some gold! ‘We only mined around 10% of the gold during the rush. After the deepest companies went bust, they stopped pumping all the water out, which washed out other companies due to the water levels rising. All the gold is still there, it’s just under water’.

A misconception with prospecting is for people to search near rivers. The problem here is that most rivers have changed since the rush, so it is hard to find where the tracks of the old ones are.

‘A few weeks ago, I went out to the same spot I first ever went to when I was a kid, and I found some gold!’

‘It’s a luck of the draw, sometimes you’ll get gold the first attempt, others it’ll be the 50th attempt, and unfortunately sometimes not at all for the whole day’.

‘In total, I have found around 15 ounces of gold. I try to move 30 to 50 targets an hour. When I am out there, I go as hard as I can, it gives me more odds of having a successful outing’.

The largest nugget Darby has ever found was 14 grams. However Stew was very lucky one day and unearthed a massive 61 grams nugget!

If you are interested in learning how to prospect or to go on a tour,
don’t hesitate to contact Darby through his Facebook page: Gold Finger Historic Tours: Bendigo & Eaglehawk District.