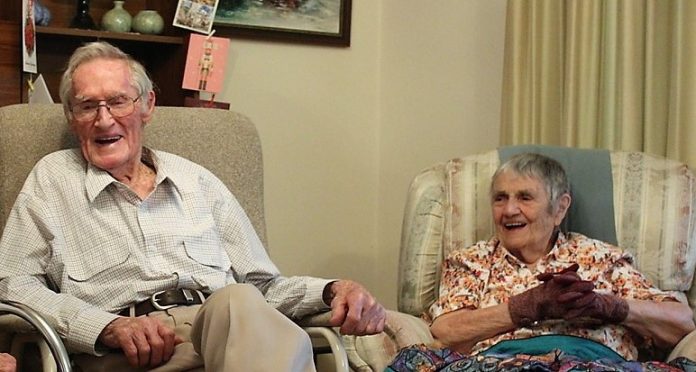 Former Eaglehawk residents, Allan and Joan James (nee Butler) both
celebrated their 96th birthdays in the middle of 2020 and on 6 November
they celebrated their 75th wedding anniversary.

Allan was born in Eaglehawk on 6 August 1924, the son of Eddie and May James (nee Flett). He attended Eaglehawk Primary School and Bendigo High School.

Joan, the daughter of George and Ethel Butler (nee Hurst), was born in England on 30 July 1924, and came to Victoria with her parents in 1927 and
settled in Mildura.

Allan and Joan both enlisted in the navy during World War Two, Allan on 12 January 1942 and Joan on 9 February 1943. They met in August 1943 at HMAS Cerberus naval base, Flinders, Victoria.

Initially, Allan saw service as a coder on the HMAS Bundaberg, one of the corvette escorts battling the Japanese submarine threat to shipping on the East Coast and protecting troop and supply ships between Australia and New Guinea. In August 1943, the unescorted Hospital Ship Centaur was torpedoed and Allan’s former Eaglehawk scout master, Rev Laverick was one of those who died.

Allan’s ability to read morse at a fair speed was quickly recognised by the Telegraphist on HMAS Bundaberg who trained him in the Navy’s operating procedures. The Bundaberg captain recommended to the Naval Board that he be re-rated as a telegraphist and this was successful.

Joan joined the Navy as a WRAN and was initially stationed at HMAS
Cerberus naval base, Flinders, Victoria, as a Leading Writer in the Signal School and later in the Torpedo School.

Allan and Joan met at HMAS Cerberus following Allan’s transfer there in August 1943. At the time of Allan’s arrival, Joan had the job of selecting sailors to attend a dance held by the WRANs every Friday night – and here is where luck and good fortune played a role. – Allan had already made friends with two other seamen – Barry Downs and Keith Eckert…

As Barry and Joan had attended Mildura High School together, Joan gave passes to the three friends – Barry, Keith and Allan – to attend the dance.

A friendship sparked between the two, and over the next three months spent weekend leave in Melbourne with Barry and Keith.

The friendship between Allan, Barry, Keith and their wives-to-be was
to last a lifetime.

After Allan departed Cerberus, the romance between he and Joan continued by mail.

In October 1945, as fortune would have it, Allan was posted to HMAS Penguin in Sydney where he worked in the Commander’s Office.
Joan, now a WRAN Petty officer, was stationed at HMAS Rushcutter, also in Sydney. They were married at Sydney Central Mission on 6 November 1945.

Keith Eckert ‘gave away’ Joan at the wedding. Allan and Joan were both discharged in May 1946.

Allan then rejoined his former employer, the State Savings Bank of Victoria, Bendigo Branch, later working at Provincial Motors, Bendigo and Myers, Bendigo. He was a member of Eaglehawk Football Club premiership teams of 1946 and 1953.

In the latter part of 2020 both Allan and Joan became residents of an aged care facility in Camberwell.