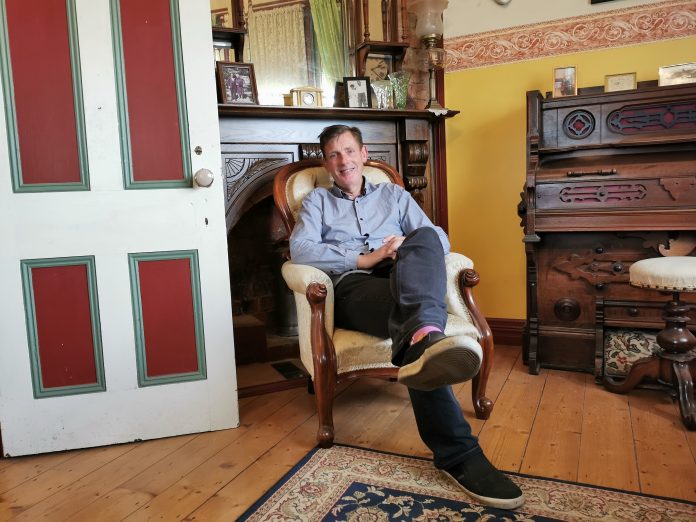 Do you run every day? This Eaglehawkian runs roughly 70kms a week… which is 3640kms a year!

If you happen to be around Lake Neangar in the early morning, you might have seen this man running. If you were
curious about who he is and how serious he is about his running then look no further! We had a chat to Stephen to find out more about his morning runs.

Stephen Kirkpatrick is a local Eaglehawk resident who has been running every morning for over forty years! He wakes up at 5AM every single morning – yes, and runs ten kilometres around Lake Neangar. After his run, he walks the dog and grabs a coffee at the California Gully McDonalds and is home by 8:30.

The only day Stephen does not run around the lake is on ANZAC Day, where he actually runs to the Woodvale Hall for the 6am dawn service.

On ANZAC day, he wakes up at 4:40am and gets there just before the service so he can change his clothes on time. “The run isn’t too bad, after Eaglehawk North it gets really dark, but thankfully there is a white light on the side of the road that I follow”. We wondered what kind of shoes Stephen runs in, and surprisingly he told us his shoes aren’t the
expensive big brand shoes! He got them from the op shop. “At one stage I wore them out so much I was running practically in my socks. It doesn’t seem to worry me, if I get sore after I run for a while and warm up it gets better”.

“I just know if I stay in bed any longer when I wake up, I get cross with myself because I think,‘I could have done 3 laps by now!’”.

It doesn’t matter if it is raining or freezing, Stephen will be out there running every morning.

“The sooner I get out there, the sooner I’ll get it done. I have become addicted to it. I will do it for as long as I can until I cannot do it anymore”.

Stephen isn’t alone at the lake that early. “There is a bit of a crew, a family. There’s Max who is somewhat of a
patriarch of the lake. He walks around. We egg each other on. Max counts my laps for me. There are quite a few ladies who walk at various ages”.

Stephen would slowly experience the changing of the seasons, and we wondered what he thought about that.

“I like all the seasons. It’s just getting lig{“type”:”block”,”srcClientIds”:[“38366aac-7938-4f0a-a684-0254b085e301″],”srcRootClientId”:””}ht when I finish with the sun rising. Lake Neanger with the full moon
reflected light makes the lake looks really beautiful. The sunrise with the trees silhouetted is very nice to look at while I’m running”.

“The dawn is a very special time of day and most people miss out on that experience. I appreciate it”.

“Some mornings in winter it can be tough”, Stephen told us. “I think to myself, ‘just get this as quickly out of the way as you can Steve’ and I run down to the lake and by the time I’ve done a lap I am warmed up.
When I come back I feel great! My McDonalds trip after is a reward for the run”.

Stephen doesn’t always eat healthily too.Some nights he will pig out on cheese cake and the next morning’s run will be his easiest. Whereas when he eats healthily, the run might be excruciatingly hard.

“I eat and drink whatever I like, but I try to limit my suger intake. I don’t live a very healthy
lifestyle, so I need to run. Life is short, so you really have got to do whatever you want”.

“I don’t think I have had a day off due to feeling sick. If I travel somewhere I always run. I have ran in England, France and in China! If I think about having a day off, I think ‘let’s get it out of the way and not be a woos’. I had a hernia in 1992 and even after that I was running as soon as I could!”

Naturally, he has built up to running 10 kilometres a day. “I used to stop running and walk and then run again.
But once I got to the certain spot, I would always make sure I ran to that spot. Then I would gradually increase the spot to run towards”.

“Running is good to wake you up, it takes the fog off your brain. It cleans you out a bit. I zone out a bit on the run, I get lost in thoughts and think about my day ahead. Its good planning time and it allows a space for the brain to sort out things and helps to clear the mind”.

So if you are at the lake at dawn, be sure to say G’day to our friendly neighbourhood Lake Resident Runner!