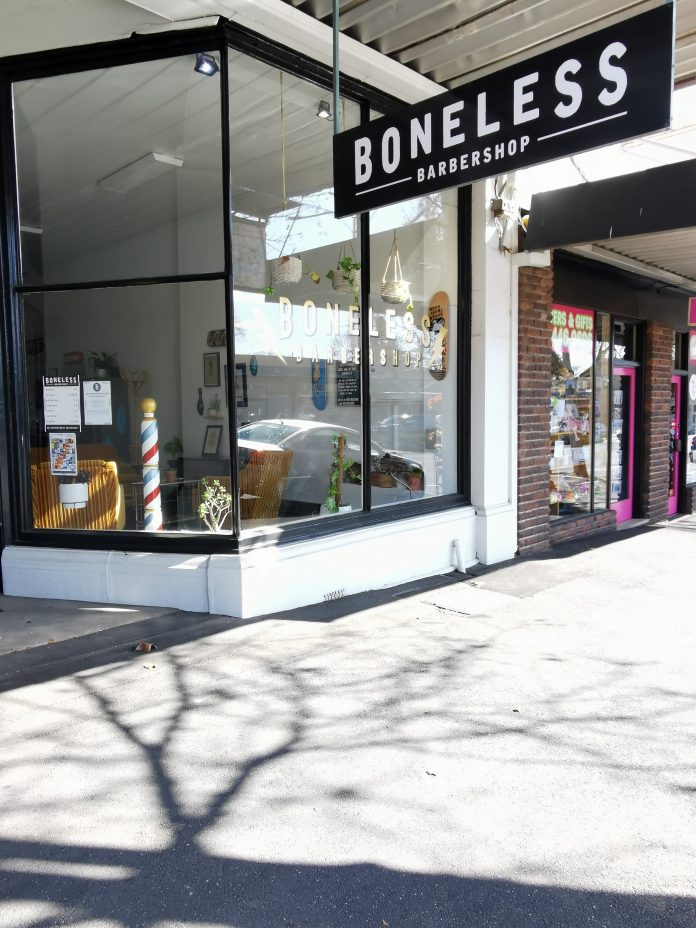 Eaglehawk’s fresh trendy barber has branched out into their own home right here in High Street! James Seaman had nested in Skips Skateboard Shop since 2018 but decided he wanted to branch out as he needed more space for what he was doing. James had wanted to have his own store, and the new space gives him ample opportunity to spread his wings and make it his own.

Due to COVID they have new operation hours which are: 9-5 Mon, Wed & Thurs, 9-6 Fri and 9-2 Sat. Boneless Barbershop’s name comes from a skateboard trick called the Boneless. A boneless is a street trick where you grab the middle of the board with your hand, plant one foot on the ground to pop the board up, and then land back on the ground with both feet on the board.

As the shop was a part of Skips Skateboard Shop it was fitting to the name.
Since he developed a brand and name for himself there, it was only fitting to carry it over to the new store.

The store has been furnished with items from various op shops. There are some groovy items in here such as the yellow couch, bar stand and industrial looking lockers all combine to give off the trendy-skater vibe!
There are also a lot of artistic pieces which decorate the walls of the store, from local pinstriped bowling pins to a variety of artists’ works found all across the walls. James and Vanessa have recently included some gorgeous succulents, supplying the store with some greenery. Some of them have been shaped to some interested styles!

James has been cutting the owner of Three Fins Clothing for a long time, and he was fortunate enough to work with them in developing a collaboration range of tees which were launched during the stores opening party on February 9 early this year.

“I’d like to think I am a part of a new exciting trend in Eaglehawk which is attracting more people from all ages and backgrounds. There are many new trendy cool stores in the ‘Burra now.”

Boneless Barbershop have been using an app called SLIKR to book your appointment online, saving the hassle of walking in and waiting in line for your session. The app is simple to use, you pay for your service then and it gives you an approximate time for when your cut will start… This way you can walk right in and out quickly and easily!

“We have had a lot of interesting people come through the shop,
from football players to people travelling the world!”

Boneless Barbershop has become an iconic part of the Burra culture:
James with his British accent coupled with an aesthetically pleasing store, and accompanied by a sensational service, this barber is definitely your place to go!

Barbershops are recognised worldwide by their iconic tri-coloured poles. But what do the spinning barber poles mean?

Back in the Middle Ages, barbers used to be called barber-surgeons and they would perform bloodletting and other surgical operations such as dental surgery and even amputations! Bloodletting is the act of cutting open a vein and letting the blood drain. They would then use a white cloth to soak up the blood and then hang the rags outside of the shop.

The barbering community still upholds the poles to symbolise their interesting and unique history.

Be sure to visit James and the crew today! Use the below link to book.
Slikr booking.