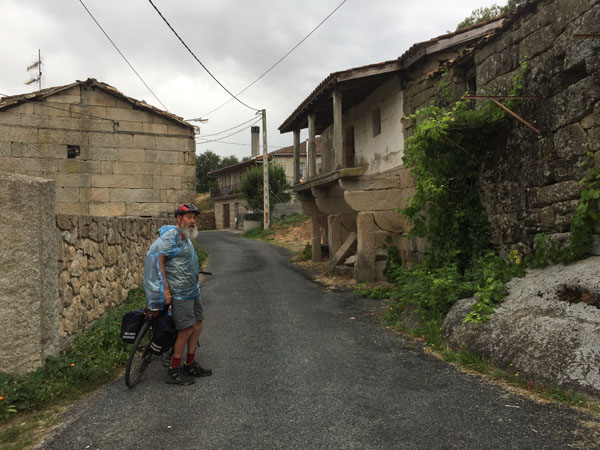 The Camino de Santiago known in English as the Way of Saint James, is a network of pilgrimages leading to the shrine of the apostle Saint James the Great in the cathedral of Santiago de Compostela in Galicia, northwestern Spain.

Tradition has it that the remains of the saint are buried there. Many follow its routes as a form of spiritual path or retreat for their spiritual growth. It is also popular with hiking and cycling enthusiasts and organised tour groups.

“I didn’t expect anything as tough as it was”

Year 8 students, Alyssa and Jasmine caught up with Leo Overberg, a 76 year old Eaglehawk resident who recently cycled the Camino in September this year.

The starting point of the 18 day adventure was Seville on the 1st of September and the end point, Santiago de Compostela.

Walking was not an option because Leo’s daughter had work commitments and so it was decided to cycle the Via de la Plata. They say not to do the walk in June to August because it is just too hot and in early September it was still very, very hot.

Leo travelled with his daughter, her husband and a Spanish man who joined them on day three.

The first 10 to 15 kilometres were great because around Seville there are river flats and it’s very agricultural. But once you leave the flats and start climbing it gets quite difficult because you’re just going up and up.

“The second day nearly killed us because we left the main road and rode 64 kilometres on gravel tracks in 38-degree heat with no access to water and shade, climbing 1500 metres and descending 1100 metres. We got lost a couple of times and didn’t reach our destination until 7:00 pm that night.

On the downhill sections he once reached a maximum speed of 56km/hr – fatal if he had of come off his bike.

“The second day nearly killed us!”

“Part of the problem with us struggling in the first few days was because I got off the plane then took a train from Madrid to Seville where I assembled my bike that was in a box, and the next day we were riding. Jet lag, heat and old age – it was unbelievably tough”.

Leo got to see beautiful countryside, impressive Roman ruins and spectacular medieval cities. Spain is a mountainous country and occasionally they had to dismount and walk their bikes up steep mountains.

The south of Spain is hot and dry with Spanish oak trees and olive trees predominating with irrigation on river flats. The north is wetter and cooler with wheat, some dairying and forests.

The Spanish love pork and pigs could be seen roaming under the oak trees feeding on acorns.

“What I remember and liked most were the remote towns and villages, the harshness of the climate, the never ending mountains, the Roman ruins, castles, walled cities, and grand cathedrals, but also many villages in rural areas that were in semi-decay because the young had left to work in the cities and only a few old people remained.

“At the ripe old age of 76 I am proud that I walked or cycled every single
kilometre of the Camino and I got to see the grand Cathedral in
Santiago”.