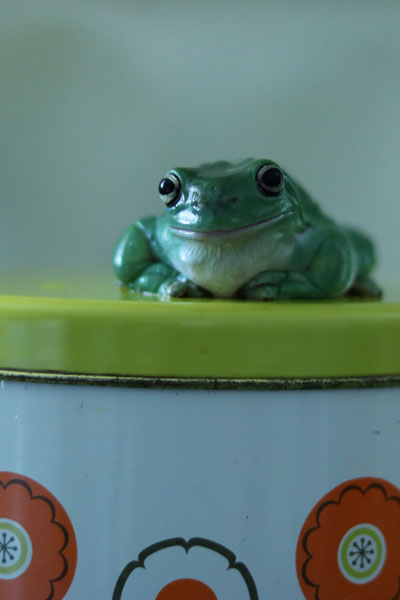 Sarena, an Eaglehawk resident, is the owner of an Australian green tree frog. The green tree frog is found in tropical areas like Queensland and the Northern Territory.

Rodney from ESC interviewed Sarena about her much loved pet.

Sarena first got the frogs in 2014 from her cousin who had owned them for five years, so they’re about ten years old now. There were originally five frogs, but over the years they have died and now there is only one remaining. The green tree frog is found in tropical areas like Queensland and the Northern Territory and if you live up there, sometimes when you go to use the toilet there’s a green tree frog in the toilet where they love to hide!!

The frogs sit on Sarena’s kitchen bench when she is in there cooking. They are very interactive because they appear to be interested in what she is actually doing. It’s as if they are saying “here I am…where’s my dinner!” “And they just keep jumping up at you – they’re the best pet”! They jump and jump. Sometimes when they’re not jumping, they just sit down on their log. Or they will sit on top of each other.

“One night I went to bed early because I couldn’t sleep. Around 12 o’clock midnight I got up and the frog door was open. To my horror, only two frogs were left in the cage and I thought oh no!! I was looking around for them and found one sitting on the stereo and one was sitting on the kitchen scales and I couldn’t find the other one. I looked and looked for it, panicking and couldn’t find it. Finally, I turned around and on the floor there was a big tub of lego and the frog was sitting quite happily in amongst the lego”.

Sarena sometimes worries about the frogs escaping because they jump around a lot at night and they can push the cage door open. She has had a cat for about five years and has often worried that the cat might eat them.
But Sparky the cat hasn’t really shown much interest in them.

“I highly recommend the frogs, they are not boring, they are entertaining and they let you know when they’re hungry. They’ve got the most beautiful big brown eyes. I get them out and put them on my hand and talk to them. They love being held and they jump from one person to the next”. They really are an awesome pet.

Are they girls or boys?
They are all male. The pet shop only sells you male frogs so that you can’t breed them.

What do they eat?
I have to buy crickets from the pet shop. A plastic container costs $7.50 and you can buy large medium or small and because my frogs are mature, I just buy the large container.

What else do they eat?
We also have a net and we go outside at night and put the light on. There are brown moths that come to the light, especially after it rains. We go out and we catch them and we let them go in the cage and the frogs jump around mad and crazy for them – they love them.

How big are the frogs?
They are big frogs, but not as big as a cane toad. They would fit inside my palm. They have big brown eyes.

What noise do they make?
When they croak, they don’t go “ribit”! They usually croak at night time when we’re fast asleep in bed and it sounds like someone’s being murdered! They make this awful noise and you wake up and you go “oow”.

Can you tell us a bit about their cage?
The frog cage is a glass
box – an aquarium and it has water in the bottom which is heated because they are a tropical amphibian. The water always has to be warm. So it’s like a sweaty environment that they’re in. There’s also a pump that pumps the water around. To set up a tank for frogs involves buying the glass tank, pump, UV lamp, heater, logs, and rocks.