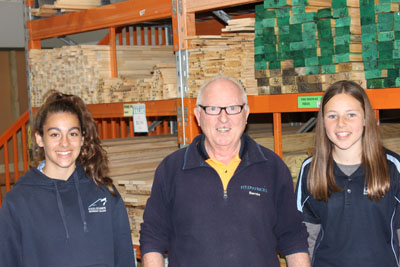 It’s been 50 years now and Bernie is 65 years old.
He’s not quite sure when he’s going to retire…………
he’s just gradually winding down, so maybe next year sometime.

Bernie Crameri started working at Fitzpatrick’s hardware store in 1969…….at least, that’s what he thinks…….he can’t quite remember!!!

“I started as a 15 year old working after school. My brother was working there first. That was in the old store down at Eaglehawk Rd down where Aldi is now. Then my brother left and I slowly started working my way up through the ranks”.

Bernie didn’t specifically want this job, it just happened. “I was going to be a meat inspector but I missed out on that”. “I was also thinking of becoming a ticket writer – that’s where you do all the labels because way back then we didn’t have computers”.

He was still at school and this was an after school job. His brother went off to be a priest and his two sisters were nuns. Bernie was the next sibling in line and didn’t really want to go to university. He completed Year 12 without any problems and was working part time at the store right up until then. When he finished Year 12 the easiest thing to do was to stay working, so Fitzpatrick’s gave Bernie a fulltime job.

Bernie stayed there because he just liked it – it was as simple as that . The store seemed to be expanding all the time which gave him the opportunity to work through all the departments, learning as he went along. His first 20 years were spent in retail, the shop section, where he worked and learnt about everything from nuts and bolts to mixing paint.

When John Fitzpatrick retired, Bernie moved into the timber department and worked there for the next 20 years. He remembers the old shop. “It had a beautiful staircase in the middle”. Then the shop moved to its current location in California Gully, and Bernie stayed in the timber section where he remains today.

Why did Bernie stay in the one job for so long? we asked. “When I went after school I was mixing paint and doing all the odd jobs and I liked it,
it was good. I didn’t plan to do it for so long, but when you like something…”

“I said : the day that I didn’t want to come to work I’d start looking elsewhere…but I liked it”.

“And with this job there’s variety. There’s the garden centre – I’ve done that, you’ve got the paint section, you’ve got bolts and you’ve got your
timber. So you’ve got everything so I stayed with it”.

We asked Bernie about how things had changed in the last 50 years. He pointed out two main areas: technology and customer service. “We used to do everything manually. We did our price list manually, but that all changed with computers, although with timber you still have a lot of hands on”.

“Fifty years ago the customer would walk in the door and stand at the cash register until someone came and asked them what they wanted.
You’d never walk around the shop like they do now. You would walk in and stand still and then I would come up and help you. I’d ask what you needed and then I’d go and get it and bring it back to you”.

“There’s never a dull moment and I have no regrets”

“These days people usually wander through the store and seek assistance when they need it. It’s self service – and it was never like this originally.
Customers can only do so much. They can wander the store but they can’t mix their own paint, they don’t always know where the nuts and bolts are, so you still need customer service. You still have to look after the customer just like you did 50 years ago, but in a different way”.

“People would walk in and say where’s Bernie?”.

There’s other store assistants, but customers want me because I’ve been here so long and I know all the things. I’ve worked my way through every single section and know all the products”.

“My favourite thing about working here has been meeting all the people”.

“People would walk in and say where’s Bernie?”

We were keen to find out what Bernie would be doing in his retirement. “I’m a mad gardener. I have an acre and a half of land and I have six
grandchildren which I babysit a lot”. His wife still works, so Bernie thought he might end up becoming a kind of househusband who prepares the meals and does the housework!!`