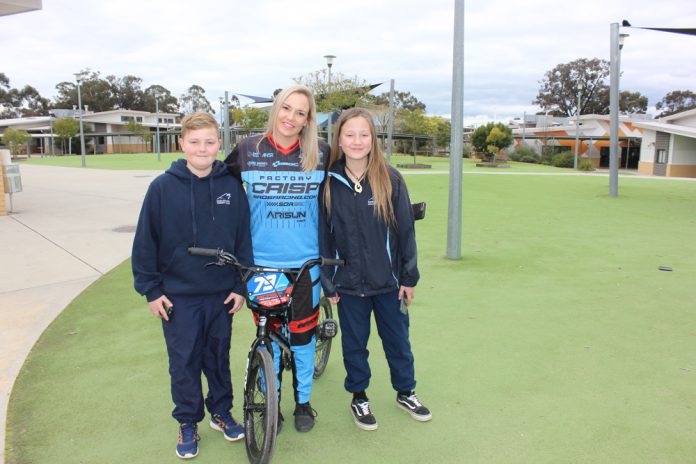 When Jaclyn Wilson, world champion BMX bike racer, recently rode into the
ESC school grounds, she was stopped by three separate students who
informed her that no bike riding was allowed in the school grounds!!!

Little did those students know that they were reprimanding the current Australian BMX Champion, who has won that title twenty two times and who has also been a former four times World Champion BMX bike racer!
Daisy and Lachie of Year 7 interviewed Jaclyn about her life that centres around the sport of BMX bike racing.
Now at the age of 41, Jaclyn reminisced about how her riding career started when she was only four. Her parents just couldn’t keep her off the bike, it was like a duck to water! She kept breaking her training wheels and her dad said “I’m not going to keep fixing these training wheels!” So she learnt to ride without them.

Jaclyn started racing in 1981 on her Kmart bike, a borrowed helmet
and a number plate that was made out of an ice cream lid.

The actual sport of BMX started in 1979, so Jaclyn hasn’t missed much. But there wasn’t a lot of competition in the Bendigo area at that time.
Jaclyn’s family decided to move to the Gold Coast when she was ten because there was more competition up there. Her success continued after the move by winning ten state titles in a row. Currently, Jaclyn holds the Australian title which was recently held in
Shepparton. She won all three events after training really hard.
Although she’s the current Australian champion, she has been the world champion six times during her career – the first time was when she was 10 years old. 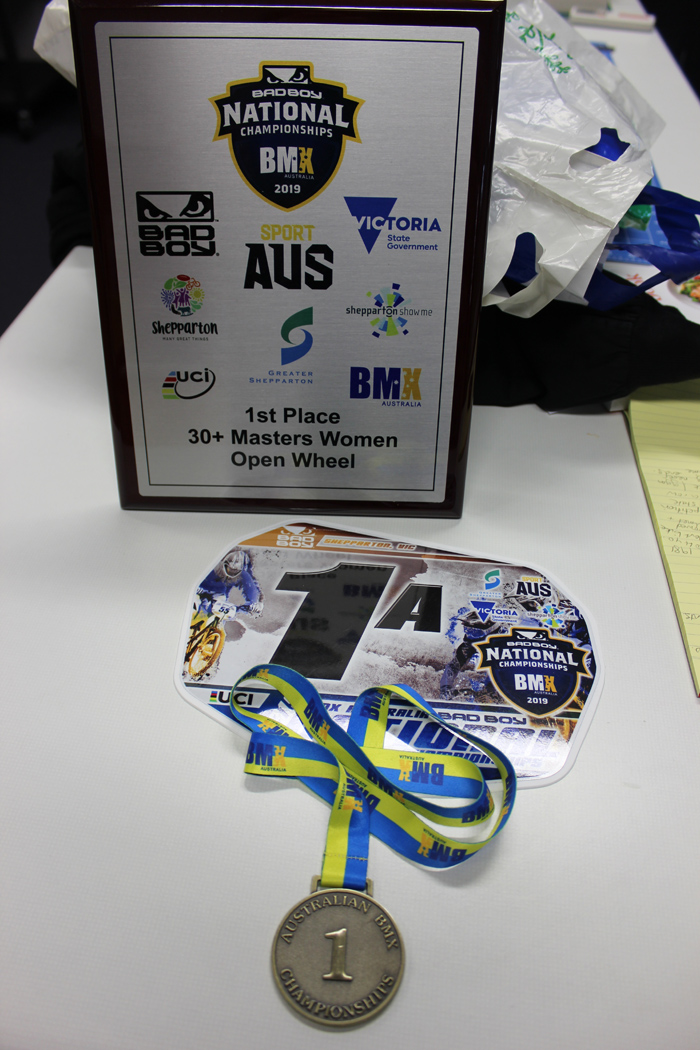 “If someone else has trained harder than me then they deserve to win because I know that I have given it everything I have.”

It’s a male dominated sport and Jaclyn loves riding against the guys for fun, usually beating them hands down!
She can give the guys a run for their money and always beats the 40 plus year old men! Most of the guys are OK about this, although occasionally there has been the odd disgruntled loser! But when Jaclyn races competitively, it’s against females in age categories and now she is in the 40 – 44 category. And at the local level she enters the elite category and races against the younger girls who are more challenging than the older women. 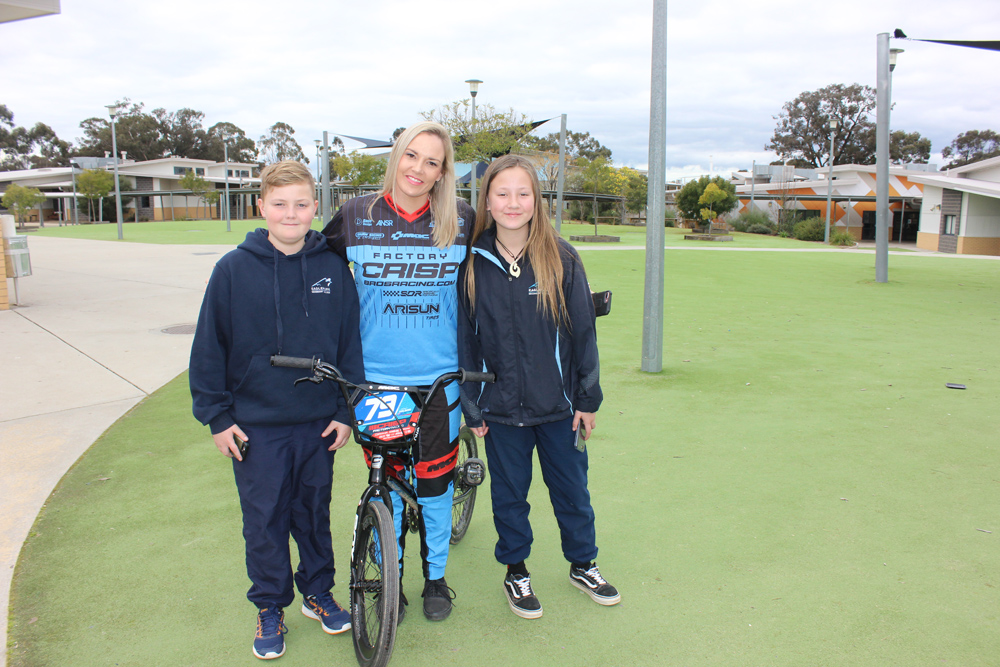 Jaclyn has run a successful hairdressing business for 21 years and juggles her job with her bike racing passion. Her training schedule is full on, usually rising at 6:20am to undertake fifty metre sprints at the Tom Flood velodrome by 6:30am three days a week. In addition, she is at the BMX track doing ten laps before work and also goes to the gym. The training never ends. ”On top of all that I do 21km mountain bike rides”.

“Any sport that anyone does can have such a great influence on your life. Being able to be competitive in my sport is definitely the reason why I am where I am today. When you love something so much, and you’re dedicated to it,
you can apply that to the rest of your life and that’s a recipe for success with everything that you do.” 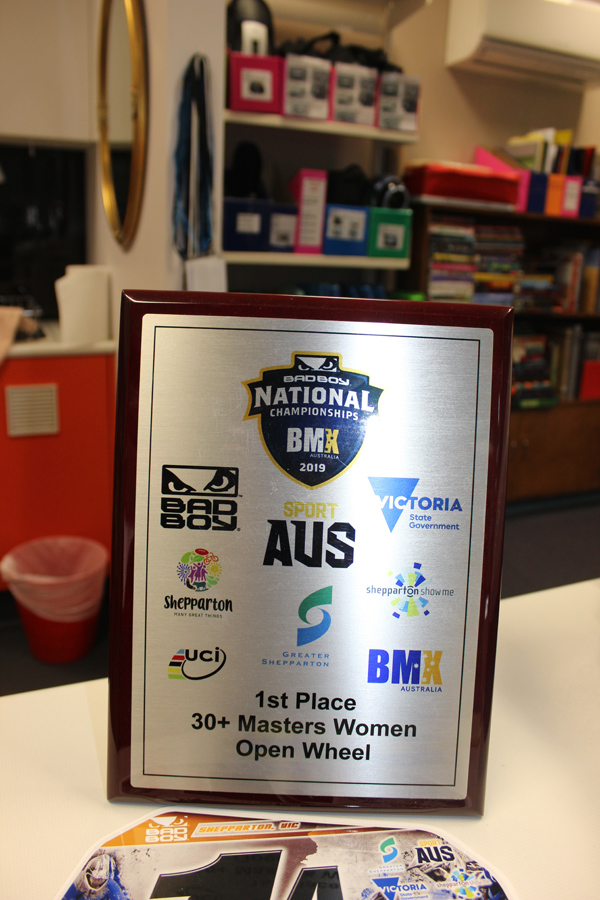 We asked Jaclyn about how long she will keep riding – she’s at the top of the sport, so where to now? “It depends how injuries go. The falls are brutal and recovery is usually lengthy. You just have to ensure that you don’t fall off because the falls are usually bad.
But I think I will race for as long as I can. As long as I know that I am competitive and I am doing the best I can. If I feel I’m losing interest and I’m not wanting to train then I would stop because I wouldn’t want a poor result through not putting in everything that I needed to put in. But at the moment I think that I have a good balance.
It’s personal satisfaction, it’s what you do to make yourself happy and what completes you. It’s because I want to and its definitely good fun.” 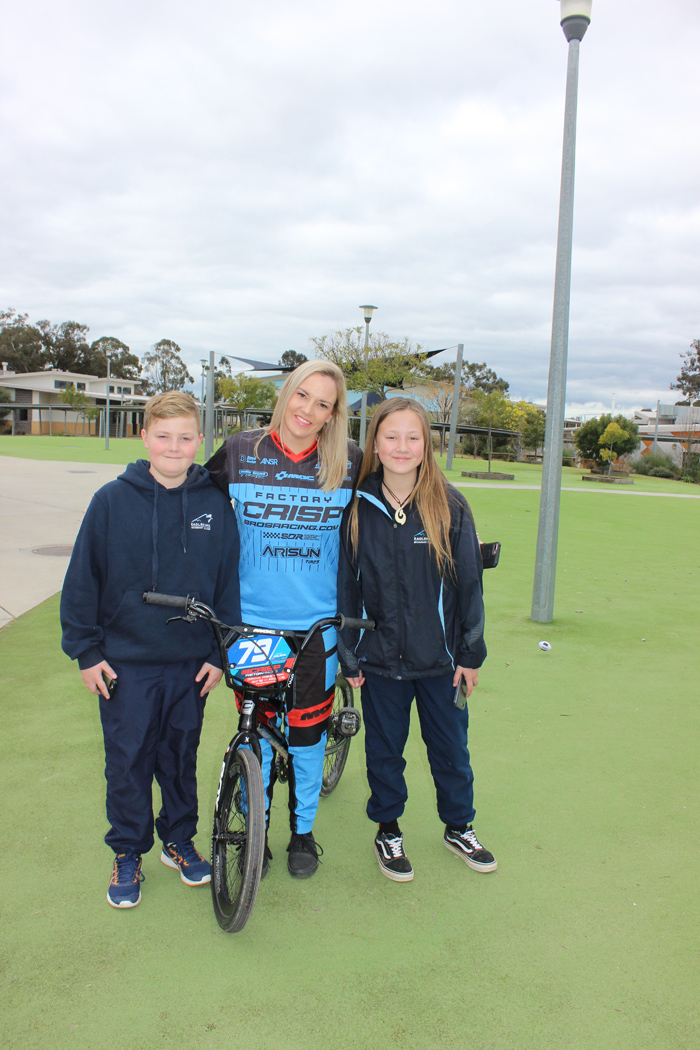 “Even at my age, I still haven’t lost the passion that I had when I was young.
It doesn’t matter who’s the fastest, who’s the fittest or the quickest – it really comes down to what’s in your heart – and I wanted that so badly.”