2022 marks 50 years since the last tram from Eaglehawk ran!

The first trams to run between Eaglehawk and Bendigo were battery powered and operated by the Sandhurst & Eaglehawk Electric Tramway, in June 1890.  However the batteries did not hold enough power to cope
with the hilly terrain.

Next came steam powered trams, which commenced in February 1892.  The Eaglehawk terminus was at the beginning of Sailors Gully Road, just past High Street.  The Bendigo Tramway Company was the only company in Victoria to use steam trams.  A steam powered motor pulled a carriage for passengers.

Jobs Gully Bridge was built after an accident in 1894 when a tram from Bendigo crashed through the railway gates closed against road traffic to allow trains to pass through.  The Jobs Gully Bridge opened to public traffic in January 1896.  Eaglehawk Borough Council wrote to the Bendigo Tramway Company the following month requesting: “that when the doubler line is in use over the bridge, that arrangements be made to prevent two trams crossing the bridge at the same time.“

Electric trams operated by the Electric Supply Company replaced the steam trams in April 1903, after major works replacing tram lines and erecting pole to carry electricity wires.  (Eaglehawk did not have electricity at this time.)

The Eaglehawk terminus was in Sailors Gully Road, near the Court House Hotel.

Buses were introduced for public transport in the 1920s, but were not permitted to travel along tram routes.

The State Electricity Commission of Victoria took over the running of trams in the Bendigo area in 1934.  Because of the number of passengers carried, large double bogie tram cars were introduced on the Eaglehawk line in 1945-1947.

Before the Eaglehawk Secondary Technical College was opened in 1964, students had to travel into Bendigo for school after finishing year 6.  When the Bendigo high and technical schools let students out in the afternoon, there would be a mad rush to the Fountain to catch the trams home.  To cope with the demand trams ran every 10 minutes.

As well as passengers, trams also brought out supplies from
Bendigo for Eaglehawk stores, such as parcels, papers, film reels for the Eaglehawk pictures at the Town Hall, and mail bags for the Post Offices along the route.

By 1970 patronage of the trams had drastically reduced. 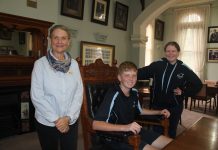 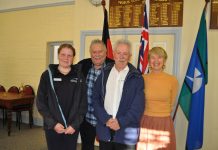 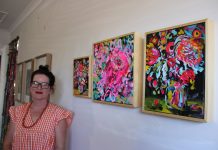