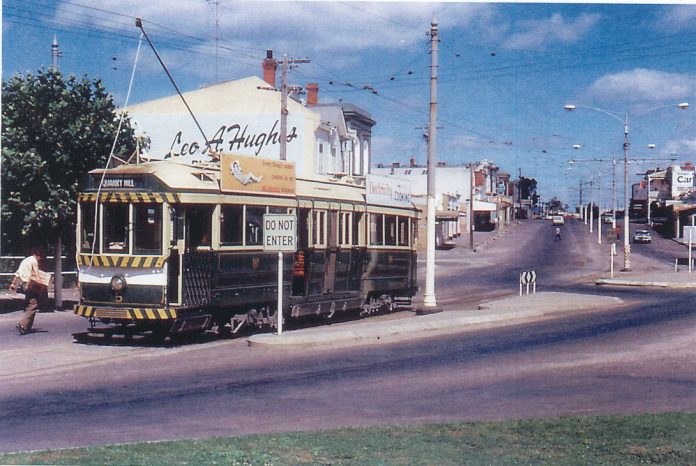 Before buses ruled the public transport system of Bendigo, there were our trams!

We talked with Steve the Tram Driver about the history of the trams in our city.

Stephen Kirkpatrick has been involved with the tram system for nearly 40 years! Steve recalls catching the Eaglehawk to Bendigo tram during his teenage years, then after their closure he started as a conductor (and later, a driver) for the Vintage Talking Tram tour service which has been operating for over 42 years.

A conductor is someone who collects the tickets and gives bell signals to the driver indicating when it is safe to move off. The conductor is responsible for the safety of passengers aboard the tram. We don’t have conductors on our buses, nowadays you just pay the driver directly!

Stephen loved catching the tram when he was younger, but like most people, he took it for granted.

‘I used to ride on the trams in my teenage years, it was fantastic. It cost 18 cents to travel from Eaglehawk to Bendigo. It was a rollercoaster ride which took 25 minutes.’

In the 1850s, the gold rush emerged in Bendigo.

The city was growing bigger and needed a modern and efficient transport system. ‘You can fit a lot of people in the tram.’ The answer was clear, we needed a tram service.

The tram system in Bendigo operated from 1890 until 1972. The first trams in Bendigo were battery operated under the Sandhurst and Electric Tram Company. Unfortunately the England-imported battery trams were insufficient in their ability to power the trams over the many hills between Bendigo and Eaglehawk. After only thirteen weeks, the company went broke. In 1892, steam engine trams came to Bendigo, and they were used to tow the old battery trams around. This time the trams were a success and carted around the locals for the next ten years.

‘When the trams first came in 1890s, it was an efficient and modern approach to a city. To have a tram running through it was progressive. People back then didn’t have access to motor cars, and buses weren’t around yet. The tram was the modern and clear approach to take. People needed to get around so the answer was the tram!’

In 1903, electric trams came to Bendigo. They built the Arnold St Tramways Avenue Depot for the new trams. Bendigo had electric trams before Melbourne did. These were wildly successful and provided reliable and affordable transport for nearly the next seventy years.

In the 1930s, the State Electricity Commission (SEC) was formed and took control of all the provincial tramways in Victoria (Ballarat, Bendigo, and Geelong).

‘If you needed to catch the tram for work in the morning, you just squeezed in.’ In the 1940s and 1950s the SEC purchased some of the bigger trams from Melbourne, but there were no more upgrades since then. All the trams are vintage. The newer trams we acquired in the 1940s, were all built around 1916. There were 23 trams that consistently serviced Bendigo.

It wouldn’t be uncommon in those days for a hundred people to be crammed into a tram. There would be people standing in the aisles, doorways and even on the running boards on the outside of the tram!

‘Back in those days you could seat about 48 passengers. But then you didn’t have all the regulations you have now, so 100 people could have squeezed inside the tram.’

‘Unlike cars or buses today, they kept going. Back then things were built to last. The people loved their trams. They enhanced the city. They were a pleasant colour; a dark yellow and green with zebra stripes on the front’.

‘The only traffic lights in Bendigo were in Hargreaves St and Mitchell St (the mall) – which you could drive through back then. Nowhere else had traffic lights.

There weren’t many accidents because there was less traffic back then and everyone knew the road rules. Plus, people weren’t distracted on the roads with their phones.

‘Over time, traffic has become very heavy in Bendigo, particularly along the main thoroughfare. We desperately need a bypass around the CBD like Ballarat has had for years. We unfortunately don’t have this and so trucks pass through the heart of the Bendigo’.

‘Nowadays you get on a bus and go on your phone and be very isolated, but back then people would talk to one another, it was a nice time’.

‘In the SEC era of the trams, everyone seemed to know each other and people would talk on the trams. As the town was smaller, the tram drivers knew their regular travellers and they would even wait for them at the tram stops. It was a personal service.’

‘It was said that if you lived on the road that the tram serviced and were a regular, the driver would sometimes stop at the front of your house to let you off, as opposed to strictly just at the tram stop. It was more of a personal service.’

Prior to the closure of the Bendigo public transport trams, members of the community petitioned the State Government to keep most of the Golden Square to North Bendigo tram line open so that a tourist tram service could run. Henry Bolte, the then Premier of Victoria, was not in favour but thankfully a change in Government occurred and the next Premier, Rupert Hamer, supported the idea and the Bendigo Trust was granted permission to trial the tourist trams for a year to decide if it was financially viable. It proved to be an outstanding success for the Bendigo community and has continued ever since.

‘They were reliable. The trams operated from 5:30am to 10:30pm. The only reason they stopped was because the tracks were due for an upgrade and the overhead cost of maintenance was too high. And Bendigo had grown, if they wanted to continue with the trams it would have been extended. A track from Golden Square to Kangaroo Flat, White Hills or Epsom weren’t serviced by the trams. The costs of running the trams would be too expensive. After the cessation of the trams on April 16 1972, buses immediately took over.’ Ironically, after the trams stopped running, four days later the SEC turned the overhead wires to Eaglehawk back on and the last tram was driven back from Bendigo to Eaglehawk for display next to the Log Lockup. It remained there for five years until it was moved to be displayed at the Tramways in Bendigo as in Eaglehawk it was unfortunately vandalised.

After the closure in 1972, Stephen supervised the Eaglehawk 26 tram. That specific tram was known to the Eaglehawk residents as their tram.

Steve’s aunty was the librarian at the Eaglehawk Mechanics Institute, and the tram was locked behind a wire fence. She asked Steve if he could be in charge of showing tourists the tram. He enjoyed telling people the history of the tram, so much so that after its vandalism he aspired to work for the Bendigo Tramways.

A month or two after the trams stopped operating, the commenced removing the overhead wires and subsequently the Eaglehawk tracks were removed. ‘They aren’t buried under the asphalt like some conspirators say. Within a year the tracks in Eaglehawk were gone.’

‘I remember there was a decorated tram for the first ever Dahlia and Arts Festival which was in 1972. In 1973, there were no tram tracks, so they were certainly gone in Eaglehawk within a year of the last tram’.

The View St tracks were covered with asphalt – they’re the only ones that are still there!’

‘In the passenger service days of the trams, you would feel the tram lurch from side to side when it would veer onto a passing loop’.

After the Vintage Talking Tram tour service began operating, a friend of Steve’s who was a driver helped him get the position of conductor. Sometime after this, Steve trained for his tram driving license and started filling in casually.

‘You took it for granted at the time when the trams were running. It was a ride into history.’

‘Along the Eaglehawk road, there were many poppet heads and mullock heaps you would see during the journey into Eaglehawk. The rusty old poppet heads were an integral part of the streetscape, they added so much more to the town. Once again we didn’t appreciate them until they were lost from our city. Now all you have is housing developments where the old poppet heads used to be’. ‘By the time 1970 came around, most people had motor cars and so the tram system wasn’t patronised as much’.

‘There was a unique sound of the trams, they were always clean and very reliable.’

The terminus at Eaglehawk was where the High St and Sailors Gully Rd intersection is. The seats that are next to Canterbury Park are the only remaining evidence in Eaglehawk of the trams existence from the tram era. The traffic island is where the tram tracks used to lay. ‘It was a sad day for many when the last tram left Eaglehawk. The streets of Eaglehawk were crammed packed, with hundreds of people at the terminus.

It was an emotional and powerful day to say goodbye to our old fashioned, but friendly trams.