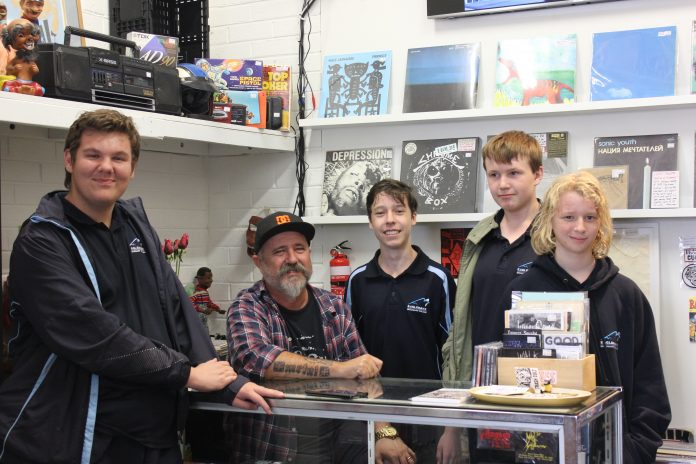 The store is open Thursday and Friday between 5-9pm, and Saturday and Sundays during 10-3pm.

“You’ll be amazed at what people collect.”

The name behind the shop was a last minute decision. They decided because the majority of stock sold in store wasn’t ‘popular culture,’ it was more like “trash culture”.

They then went from Trash Culture, to Trash Cult. They chose “Cult” because of the items that are sold there are items from a sort of cult mentality: ‘The shop attracts a certain demographic, people from Melbourne and Ballarat also venture out to Eaglehawk to visit the shop’.

The main area of stock that Mick sells are films and novels. ‘We stock different movies and books which are obscure and are not available in Australia. We try and find unique things to sell that people can’t get from normal stores.’

Mick grew up in Eaglehawk, he loves everything about it. Mick thinks Eaglehawk is a great place and he loves it here, ‘it’s got everything, the botanical gardens, two lakes, skate park, kids playground, we have stacks of free parking, it’s the gateway to the Buddhist Stupa, it’s essentially a historic village just outside of Bendigo.’

‘We like to think we curate everything in here; we aren’t buying random things so we are proud that it is all deliberate stock.’

Skips Skateboard Shop really paved the way for Mick to be inspired. He thought it was a really cool idea to have a skate shop and a café here in Eaglehawk.

It started a new wave of young business to flourish and attracted a younger
demographic to the Borough.

Back when Mick was younger, he used to read comic books a lot and at the back of the comics there would be advertisements for silly things like x-ray glasses. ‘One of the ads I saw had rubber horror masks for sale, like werewolves and zombies, and so I took the image and my friend sharpened it up and there was our logo!’

Trash Cult has had some live music at the venue, they had music on our opening night and during early March. They had experimental bands play out the front of the store. Mick hopes to do much more music events like this in future. ‘We mainly sell vinyl, cd and also cassettes, from independent or underground musicians’.

Mick also has a lot of film and books in the shop. We call ourselves the “purveyors of unpopular culture”, we like to stick to underground and niche things to supply people with the products that people can’t buy at other places in Bendigo.

Back in March when we interviewed mick, he said his vision for the future was to stay put and see how things went for a while, but that he wouldn’t mind trying to move into a bigger store in Eaglehawk… he got his wish! Trash Cult moved locations and reopened on the 28/07.

He wanted to do it so he could fit more stock in as it was very cramped and he couldn’t show off all the stock. He wouldn’t mind also adding in some seating inside the store, and maybe a live music area.

There is a massive variety of stock in here, from obscure music to rare collectible items many decades old! ‘I had some original Planet of the Apes masks from 1975, to find them in original condition, is an amazing find.”

Trash Cult is certainly a valued addition to our Eaglehawk community. Make sure you pop by as you never know what you will discover!