Home Community Mick Steps Down But Not Out
Facebook 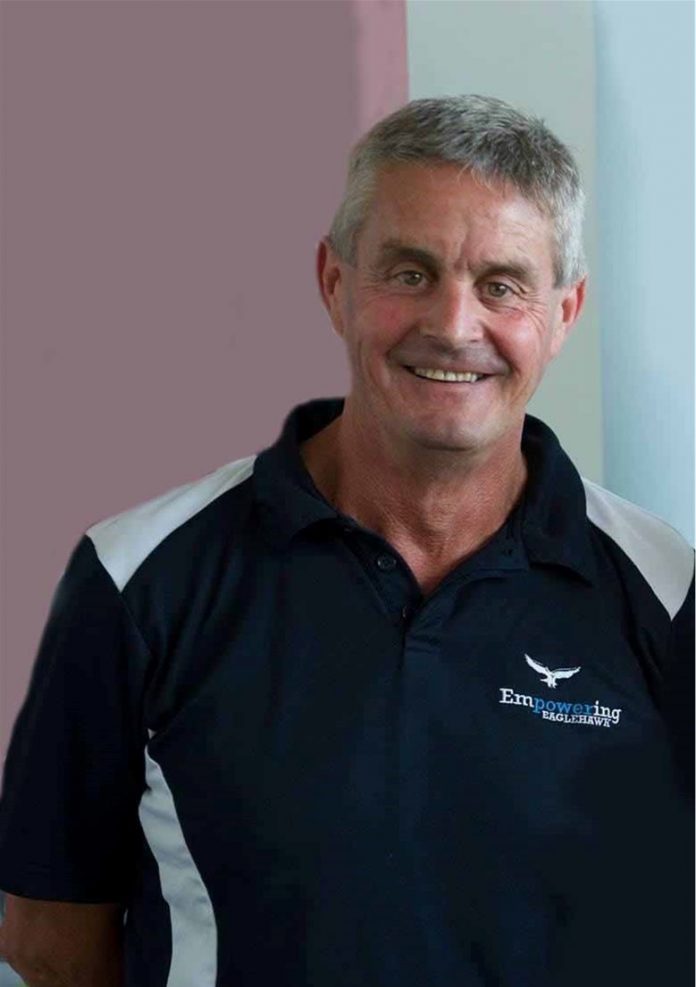 Mick came to live in Bendigo from Melbourne when his family moved up here about forty years ago. “I’m a Melbourne boy, I’m probably not a local yet as I’ve only been here for forty years… I’ll get there’

He loves living in Bendigo and wouldn’t have it any other way.. He says its a fantastic place to live and work. There’s no traffic like in Melbourne, you can get your kids to sporting events easily and you can get from one side of town to the other with ease.

Mick’s involvement with Empowering Eaglehawk started about 13 years ago in 2006 when he was invited to join the group. He was quite involved in the junior footy club with his own children and that led to him being involved in other committees.

There were only about four or five people on the Empowering Eaglehawk committee back then. It was just starting up and it was a brand new concept for Eaglehawk.

“I was doing lots of community things. When you go on different committees you get to meet a lot of different people.”

The intial idea was to raise ten or twenty thousand dollars and then put it back into the youth of Eaglehawk. Mick took on the role as a general committee member and Peter Cox was the chair. Together, Mick and the other committee members got involved with projects whilst looking at the governance and structure to get the organisation up and running. It didn’t take long before some financial partners were found. Bendigo Bank being the prominent one.

The initial idea was to raise ten or twenty thousand dollars and then put it back into the youth of Eaglehawk.  Mick took on the role as a general committee member and Peter Cox was the initial chair. Together, Mick and the other committee members got involved with projects whilst looking at the governance and structure to get the organisation set up and running. It didn’t take long before some financial partners were found, Bendigo Bank being the prominent one.

A concept arose out of that – getting commissions, spreading the word and getting more projects done which bought more people on board.  Then the funds just started rolling in a bit more freely.

Currently there are around twenty people on the committee from all
different backgrounds. The old, the young, male, female, school types, sporting types, even church people.  That’s the beauty of it – the diversity.  So there’s always lots of opinions by having a diverse spread of local community minded people.

Mick remained the president for eleven years after Peter Cox’s initial few years, although the initial idea was to rotate every couple of years through the committee.

At the AGM in August 2019 Mick handed the presidency over to Aimee Croft, a young Eaglehawk resident and former Eaglehawk Secondary College student. Aimee is now running the biggest foundation of Eaglehawk. A pretty good effort for a young person.

“I’m still there, but it was time for me to step down from the committee.  It was time for the organisation to have different views and different ways of running things – it was someone else’s turn.”

“It was time” Mick replied when asked why he chose to step down Mick has a firm belief that the youth bring some great ideas and have great enthusiasm, and just have a different stream of things to add to the committee.

Empowering Eaglehawk has raised funds for nearly every single organisation in the 3556 area and in most cases more than once.  There would not be one organisation, sporting, religious or community group that wouldn’t have received funding at some time.  The numbers are staggering – over a million dollars has been raised for local groups.

Empowering Eaglehawk raised well over $150,000 for the playground project.

All the sporting bodies have received some form of equipment or
assistance as well as many other community groups including the schools. In addition, Empowering Eaglehawk offers scholarships through schools and it has been a priority of the Committee to ensure that we connect with and give back to local young people.

During Mick’s presidency, Empowering Eaglehawk has joined with other community groups like the Eaglehawk Development Group. It was a group of people with sporting backgrounds including football, cricket, lawn bowls and netball.

They were running a project to raise funds to upgrade the football oval, cricket nets and the bowling greens.

Then the playground developed from that and Empowering Eaglehawk became heavily involved in raising funds to make it happen, raising well over 150,000 dollars for the project.

Mick is passionate about the Eaglehawk Football Club as well as most of the sporting groups around town and remains heavily involved in them.  He’s a life member of the junior and the senior football clubs.

“Sporty, healthy, active projects are fantastic and we encourage everyone to get out and about and support them.”

We asked Mick what he had gained out of his involvement from a
personal perspective.

They’re involved in their kid’s local schools.  They’re putting money into
certain events, like supporting the Dahlia and Arts.  So you just get to meet lots of people.”

“When you bump into people in the street and they say hello to you, how are you going and what’s happening, sometimes you’re not even sure which group they belong to.  But I know that we’ve done something for them so that makes it pretty special.”