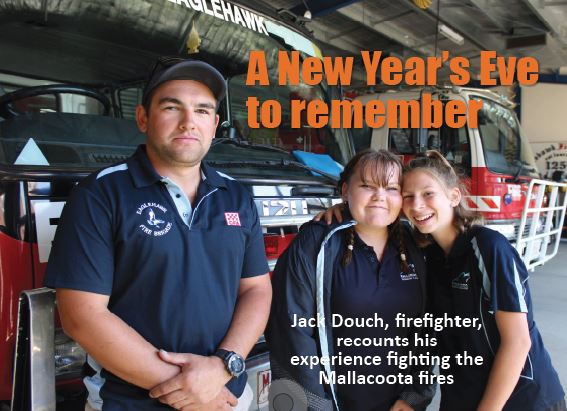 Pictured above: Jack with Isobel and Keesha

The end of December 2019 brought sweltering hot days and Bendigo’s residents had just finished Christmas festivities and were thinking about New Year’s Eve. But not Jack. He had volunteered to fight the fires in Mallacoota and was getting ready to embark on a trip that he would never forget.

Jack Douch is a carpenter by trade and joined the CFA about six years ago as a volunteer. He has been a member at the Eaglehawk CFA for about four years.

On Saturday December 28th Jack was deployed to Mallacoota via Orbost as a member of a strike team.

A strike team is an assembly of five appliances that are led by one vehicle and are assembled together to their own and fighting the fires individually. “Volunteering for the CFA was something that I had always thought about Jack was the only person from Eaglehawk CFA in the first deployment. He applied to volunteer from the 28th December to the 1st January.

Jack was deployed with a selection of members made up from our local area who are part of a group called the Fortuna Group which consists of brigades from Lockwood, Maiden Gully, Marong, Golden Square. Kangaroo Flat, Bendigo, Eaglehawk, Huntly and Strathfieldsaye.

On our strike team we had tankers from Gisborne, Talbot, Carlsrhue, Taradale and ourselves. In addition which is a field command vehicle dual cab ranger which has your strike team leader who is essentially your manager.

A tanker is the firetruck that goes to grass and scrub fires and also bushfires. Whereas a pumper goes to the structural fires – more of an urban based appliance. You can fit five crew members in a tanker.

Rather than sending five appliances out of Bendigo, it was spread across the region. This is normal practice. In our local group we’ve got a strike team that could go to just a small, snort duration deployment.

“They were a bit worried that it was going to be their two trucks against the world.”

The team staged at the base camp at Swan Reach-a football ground covered in tents with all the basic services needed for the firefighters, SES, ambulance and first aid. Anyone that is working the line will actually come and camp there and that’s essentially home whilst you’re deployed.

Jack’s strike team ended up staying one night there due to the fire taking off in the Wyndham River area which directly impacted Mallacoota.

On day two Jack’s team were deployed to Numeralla, near Orbost. They had a day’s planning up their sleeve to get to know the local area and prepare for what was going to be a pretty heavy fire day.

When the team got to Newmerella, there was a feeling of angst in the community. Newmerella is a smaller community of 500 having only two tankers and a small member base.

“They were happy to see us because it meant they had some support.. they were a bit worried that it was going to be their two trucks against the world”.

In Mallacoota at the time, the population was about 800 to 1000 people and about 1000 houses. There’s not exactly a lot of residents, it’s more like a holiday village. But in the time the strike team was there, there was an estimated 6000 people.

The night before New Year’s Eve everyone was asked to camp on the beach where a public meeting was held advising people that the safest place was on the beach.

Jack drove the truck for the five days that they were deployed as well as being active on the ground assisting with extinguishing the fires.

“I had a lot of mixed emotion I guess, with the planning of stuff, You’re constantly thinking about what the fire behaviour is going to be and how things are going to go. You’re preparing yourself mentally for the event. There’s a lot of anxiety and you’re mad if mere don’t get a little bit nervous.”

“You’re constantly thinking about what the fire’s behaviour is going to be and how things are going to go. So you run a lot of scenarios through your head and try and get an understanding of how you’re going to deal with that and how it’s going to pan out. We were pretty fortunate that it worked out how it did.”

Normally a strike team is deployed for a day. In this case, the team was away for five days and then extended by a further day. The team did not return home until New Year’s Day due to the events that took place. To get home, the team was helicoptered out of Mallacoota on New Year’s Day. They landed in Marlow at the Orbost airbase and were then chartered home in light planes from Orbost into Bendigo airport.

“It was a pretty long day and Jack got home safely and took us about twelve hours to get home. They had to charter flights and there were lots of restrictions now has memories of how he was a part of an event that Australia will never forget. He and many others around getting flights in and volunteer to put themselves out of the area due to fire activity. There is only one road in and out of Mallacoota – it’s quite an isolated sort of place. It’s quite a windy narrow sort of a road with only one lane, and it was affected pretty heavily by fire.”

Jack got safely home and now has memories of how he was a part of an event that Australia will never forget. He and many others put themselves in the line of danger to save lives.