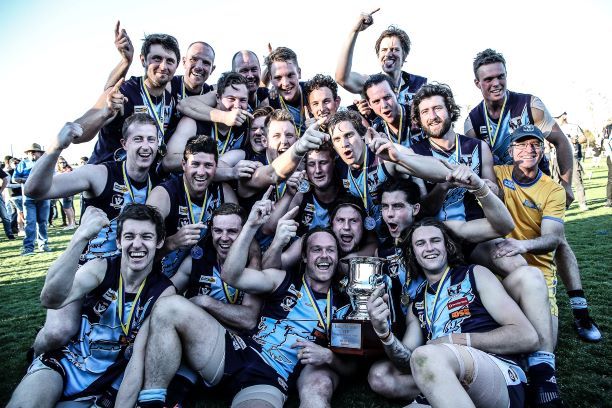 1)What was the final score and who played the best?

Brodie Collins kicked the first goal and had a super match in the midfield, he was awarded best on ground by the umpires. Jonty Neaves dislocated his elbow 2 weeks before the grand final and somehow got up to play and was brilliant in the ruck, he was also awarded a best on ground medal. Joel Mullen was the youngest player out there and had a fantastic game on the wing. Oscar Madden played a huge game in defence, he didn’t get beaten all day. Ben McPhee kicked a few goals and had a great game, he was also first to get his shirt off after the game.

The atmosphere was electric from the first bounce. Gedd Hommelhoff and Glen Daly laid big tackles in the first few minutes and the noise from the crowd was unbelievable. At times on the ground we struggled to hear each other, the huge Burra crowd was out in force!

3)During the season when did you know that you were the premiership favourites?

I don’t think we were favourites at all during the season. Strath recruited well in the off season and everyone had them pencilled in as favourites throughout the year. Our group always believed we could win it and I think others started to think that also after we beat Strath in the second semi final by 40 points.

4)How did it feel to hold up the premiership cup?

It’s hard to describe the feeling of holding up the cup. To be a playing coach with my home club and win a premiership is something special. It’s why we all play footy and I had previously lost 3 senior grand finals with Eaglehawk so that made it even better. It means a lot to so many people in Eaglehawk, all our players, coaches, volunteers, sponsors, supporters and community so it’s just great to be able to win it for them. Eaglehawk is such a proud club and 10 years was a long time to wait for one!

5)How did it feel to finally get 1 back on your arch rivals Strathfieldsaye?

The loss from 2017 sat with the players all season so it was great to be able to rectify that result. We’ve built up a pretty fierce rivalry with Strath over the last few years so it was nice to get the job done this year.

6) You have had a few recruits over the off season, who are they and what will they bring to the club?

The club has recruited really well in the off season, firstly with new coach Travis Matheson. Trav is great mate of mine and has won plenty of premierships playing and coaching his home town Kerang. Trav has also played at Eaglehawk a few years back and has coaching experience with the Pioneers and Bendigo Senior Secondary College.

Ryan Gillingham also comes across from Kerang, he likes to be called Chinnamag or Pink man and also has a full cabinet of premiership cups. Chinnamag will add pace and skill and plenty of experience. Clayton Holmes joins the club from the Central Murray as a key position player and will add some hardness and flexibility. Richard Tibbett comes back to the Burra from a stint at Marong and Boort. It’s great to have the big Tib back in the 2 blues where he played all of his junior footy.

In other, very sad, news for the EFNC they lost one their greats in November when Team of The Century Coach John Ledwidge passed away.

A BFNL Hall of Fame inductee John was a stalwart of the club and Eaglehawk community. He lead the club to two premierships and was a great coach, ruckman and key forward. He was known for being a true gentleman and fantastic mentor and leader. John will be missed.