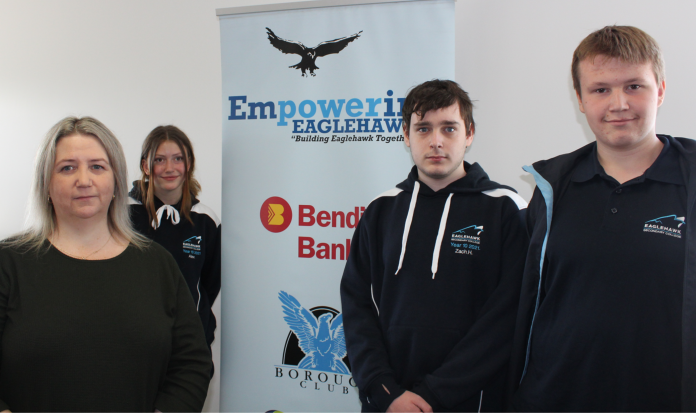 Sonya Kilby is a member of the Executive Committee of Empowering
Eaglehawk and represents the Bendigo Bank in this role. She is passionate about Eaglehawk and making the community a fantastic place to live.

At the time, Bendigo Bank was looking for ways to give back to the community and so a partnership was created which allowed community members to form a committee and then distribute funds via grants to people in our community. And it’s grown from there – over a million dollars, and it just continues to get bigger and better.

“Empowering Eaglehawk is about the community – It’s as simple as that”!

Prior to working at the bank, Sonya was employed at the YMCA.  Peter Krenz, who was a founding member of Empowering Eaglehawk asked Sonya to take a position on the committee which she felt was a real honor.

Sonya had lived locally for a long time and wanted to be involved because she loved what EmpoweringEaglehawk was all about. When she commenced work at the bank, it was just a natural progression that she stayed involved with Empowering Eaglehawk and represent the bank.  Sonya could see that the bank really stood for what the community believes in.

“You love where you live and you love what you do”

Sonya  believes that it’s all about getting the word out there.  She’d love to think that most people know what Empowering Eaglehawk is all about and that it is a worthy organisation that represents the community.

There are a few different roles and different ways to get involved in the
committee itself.  You can become a general committee member by
attending a monthly meeting.  There’s also the executive committee and the marketing committee. Everyone has a small job to do. Sonya’s role involves mainly grant decision making, with many other tasks intertwined.

“We go out and talk to all our grant applicants about what they need to do in terms of meeting the criteria to apply for a grant.  We also like to ensure that people understand the involvement of Bendigo Bank and
Bendigo Telco”. “Grant applications are always open, for example, you may have a project at school that you think is really good and you need some funding for it”.

The playground is a prime example of a project that was driven by the
community. People wanted it and made it happen.  It’s about community. Simple as that”.

“Probably the biggest thing that COVID taught us was that we can’t always get out and do things.  But we can still be current and relevant in the community, even if we’re not out and about”.

“We will continue to keep supporting whatever is around as well as offering grants and doing our marketing to get the word out there.”