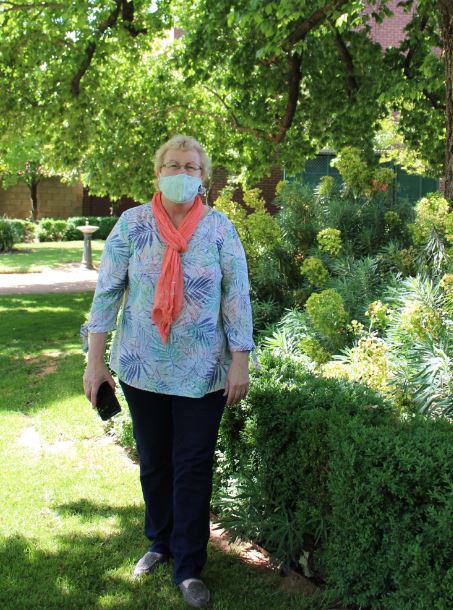 We asked Andrea why she decided to run for council again. At the end of her initial four year term in council, Andrea realised that there were many projects that remained unfinished, and she wanted to see them through to completion. “There was lots of unfinished business and that’s why I decided to run again”. “There were things like the Eaglehawk Landfill being closed during this term of council and the possibility of waste being a resource than rather just going straight into landfill—what that might look like. We had a conversation with the farming advisory committee about regenerative agriculture. There were just projects. that I wanted to see go through”.

Cr. Andrea Metcalf is entering her second term in office and looking forward to engaging with community members to hear their concerns.

“I would go out and walk the streets and chat to people.”

Andrea felt that the campaign was really quite different this time. She thought the election might be postponed because of Covid, and felt really sorry for the council members that were campaigning in Melbourne. “Towards the end of it we could get out and at least be talking to people. I love the face to face” “I love living where I live and I love arguing for my community”

“I love living where I live and I love arguing for my community. The people are lovely and are so passionate. Eaglehawk people are so proud of who they are. As they say, Eaglehawk is the greater part of Bendigo — you hear that all the time.” Andrea is passionate about the environment and is keen to see a sustainable solution when the Eaglehawk Landfill closes.

“Eaglehawk people are so proud of who they are. “

“Waste will be a big issue in the next four years and we will need to have some solutions”. During the campaign, many residents contacted Andrea to voice their concern over the illegal dumping of rubbish. People are generally concerned about this issue and it is something that Andrea has taken on board. People also asked Andrea about a hard rubbish collection. This was actually trialled with minimal success some time ago. However, it’s something that remains on the agenda. The other idea that Andrea is keen to pursue is the practise of consulting the community about where council money is to be spent. “In other countries they actually send a budget out to the community for people to vote on regarding where council will spend the money. So if they have three fantastic projects and all of them are great, but can’t afford to do all of them what would people prefer? “ “What would it look like if we were to ask the community, what’s important to you and tell us why? We could then really engage with the community about how we spend money.”

Andrea also spoke about the Peter Krenz Leisure Centre redevelopment project. “Just before council went into caretaker mode it was moved to the next stage of getting costings and designs drawn up. It will be a long and slow process. But for the Eaglehawk community I think that will be their key project over the next four years.”

Where will Eaglehawk be in four years time? “Eaglehawk is going ahead because it always has projects on the go. It’s a very passionate and caring community, “ And last of all, Andrea’s final words : “I’m re-energised and ready to go. I’m very excited and grateful to be elected”.