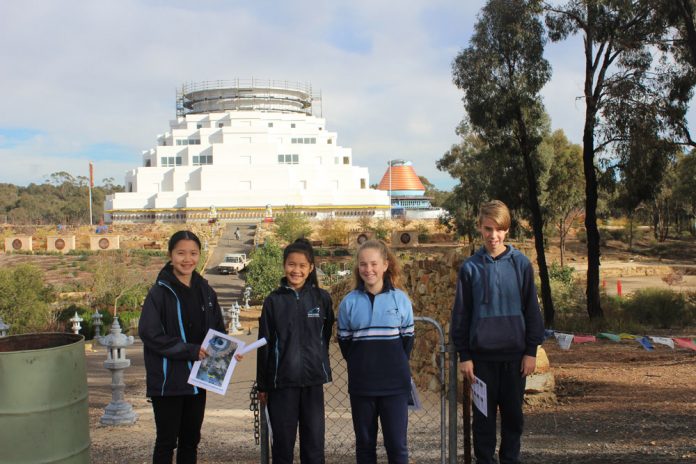 Four students visited the Great Stupa of Universal Compassion and were lucky enough to interview Alyce Crosbie (Marketing and Events Coordinator) and Ian Green (Chairman). Following their interview they were taken on a tour of the Stupa by Kristy McKimmie and Kerryn Tibbett. 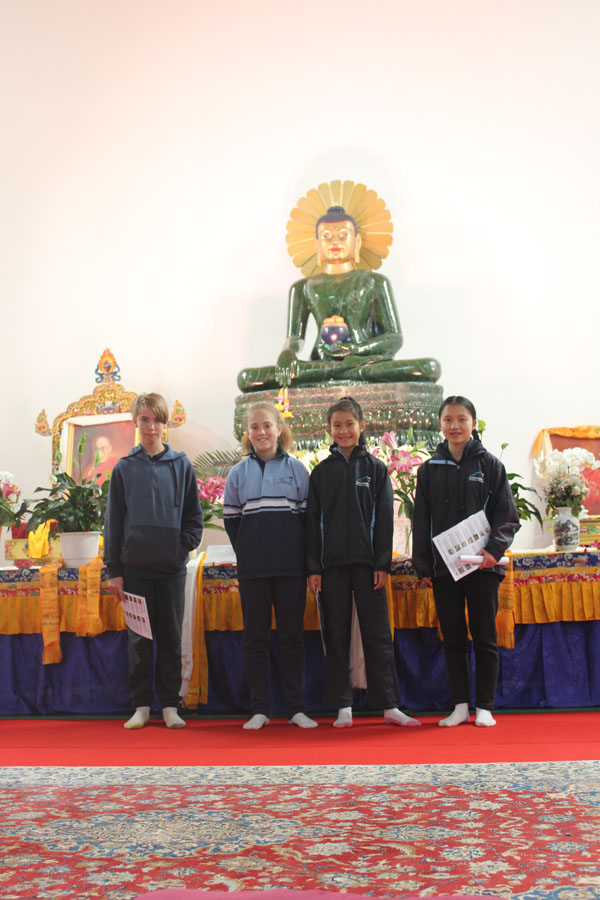 The Great Stupa is designed to represent the famous 15th century Gyantse Stupa (Kumbum) from Tibet. It is 50 metres square at its base and rises to almost 50 metres high. It should remain stable for at least 1000 years. With its massive size it is the biggest Stupa in the whole western world – and it’s only 13 minutes out of Eaglehawk!

When we arrived at the stupa we sat down with Alyce and asked her a few questions about the Great Stupa and the Illumin8 festival (held in May each year).

Alyce was able to tell us that they cleared the land in 2001 however the plan was laid out in 1989. In 2003 the footings went down and construction began. 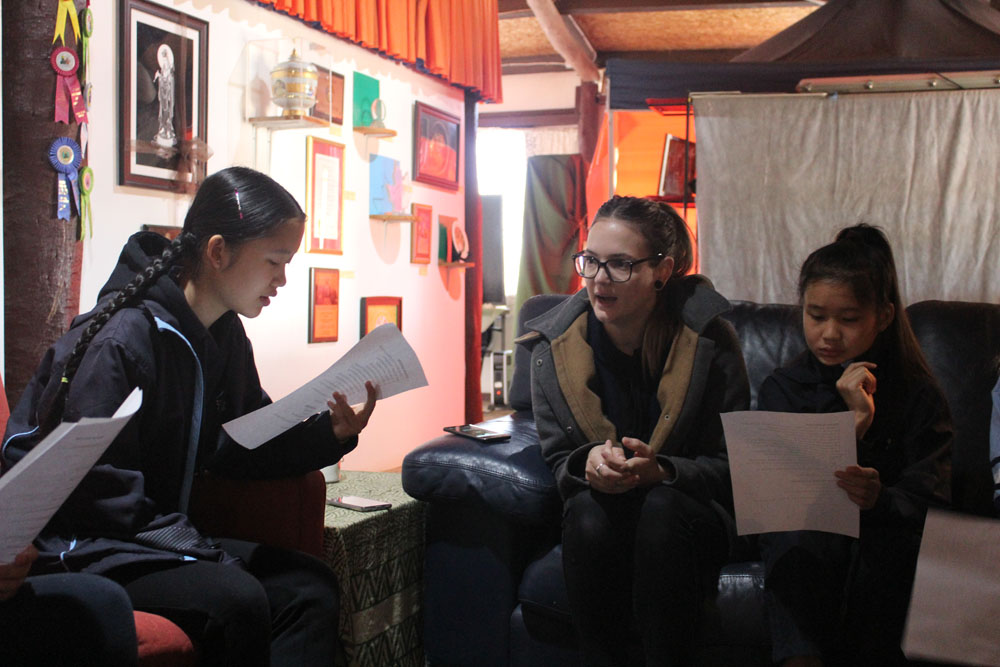 The Idea of the Stupa was from a monk called Lama Yeshe. He came out to the site and had a vision of a temple and a community being built and passed his dream onto Ian Green, one of his students.
It has taken around 2 million dollars to get to this stage and there is no end date. The outside of the stupa will be finished by the end of this year. It will take many years after that to collect the artwork and finish the inside of the stupa.

The stupa was open to the public in 2005 and over the years there have been 100s of people helping build and volunteer.

There are a lot of tourists who visit. 60% of the population there are tourists and the other 40% are Buddhists who come and go as they please. The Stupa is linked to the Mahayana strain of Tibetan Buddhism which all of the monks follow. There are about 8 monks that live in the monastery and they hope to house up to 24 monks in the future. The monks have a temple and wander anytime they want.

The aim of the stupa is to spread peace and harmony around to anyone. 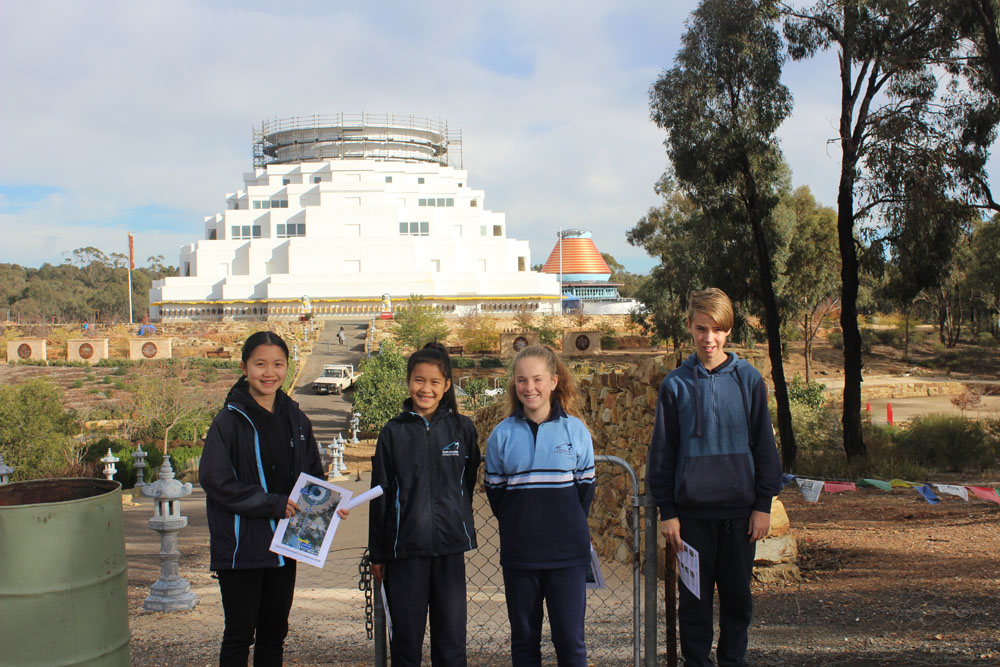 The Stupa has 3 different events each year; the Lunar New Year in February, the Illumin8 in May and the Vegecareian in October.
The Illumin8 festival has been running for about 8 years. It used to be called Festival of Light. This is the second year of it being called Illumin8. The festival is held to recognise the birth of Buddha. Around 6,000 people attend and it is increasing. They put an 8 in Illumin8 because it is a lucky number in Buddhism.

In 2007 the Dalai Lama came and he blessed some of the statues and buildings at the Stupa. He talked to everyone and told them how important he thinks the Stupa is to Australia. He has no current plans to return however he has said that he would like to come back after the Stupa is finished. 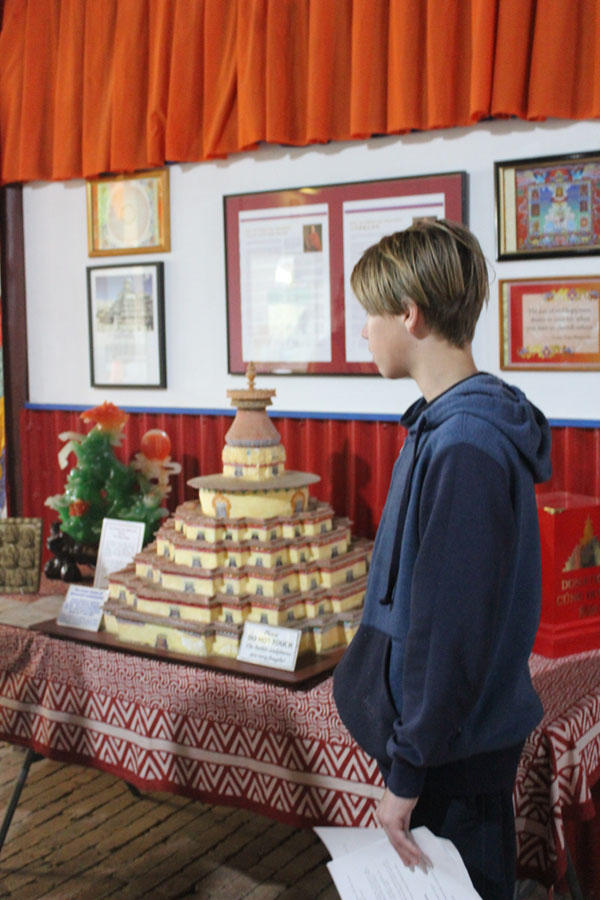 After Alyce we spoke to Ian Green, who is the chairman, and we asked him a few complicated questions about the relics. He said that there are many relics of Shakyamuni Buddha who lived 2,000 years ago and Harshapa Buddha which is an extremely rare Buddha to find relics of. There are also very modern relics from different yogis. There are relics that are 10 or so years old and they are made by yogis who live in mountains like the Himalayas. 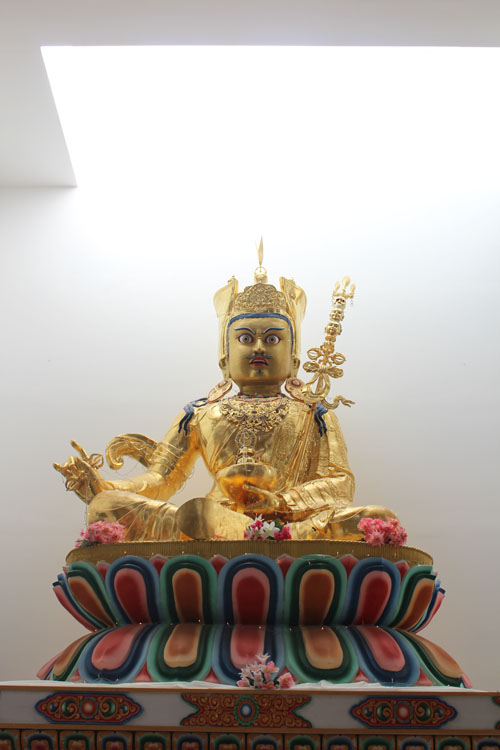 We asked him about the history of the Stupa and the iconic Jade Buddha that lives there. His story was quite interesting: When they discovered the 18 tonne boulder of Jade, Ian was contacted by a man in LA and went over to examine it in Canada a few months later. That night his teacher Lama Zopa Rinpoche had a dream that the jade would become a Buddha. It took five years to make the Buddha and after it was finished the statue travelled the world for 9 years visiting over 120 cities in 20 countries with around 12 million people seeing the Buddha. In May 2018 The Jade Buddha arrived at its home at the Great Stupa of Universal Compassion.
The Jade Buddha for Universal Peace was formally consecrated by His Holiness the Dalai Lama on December 1 2009. 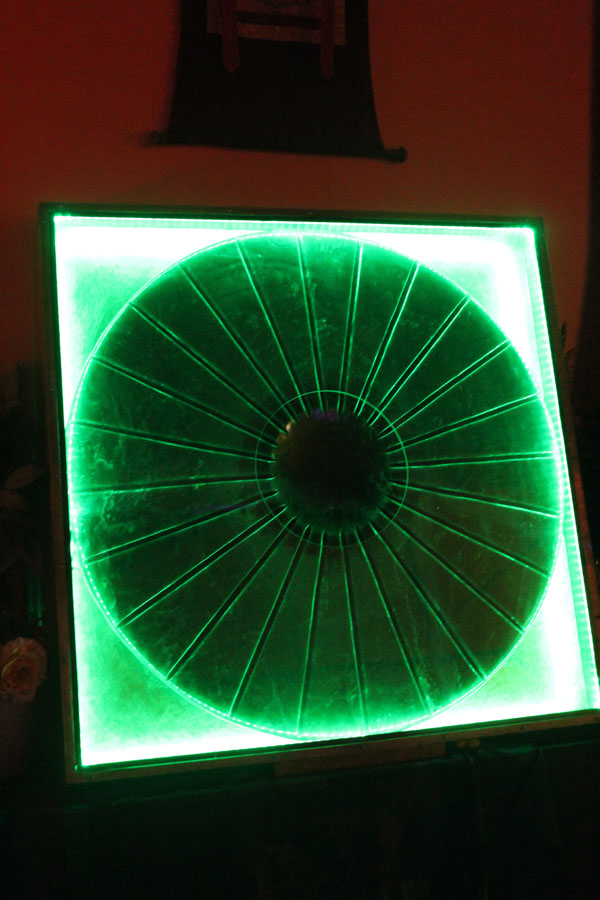 Photo of the Jade Halo which is so green and cold because of the concentrated level of iron within it! 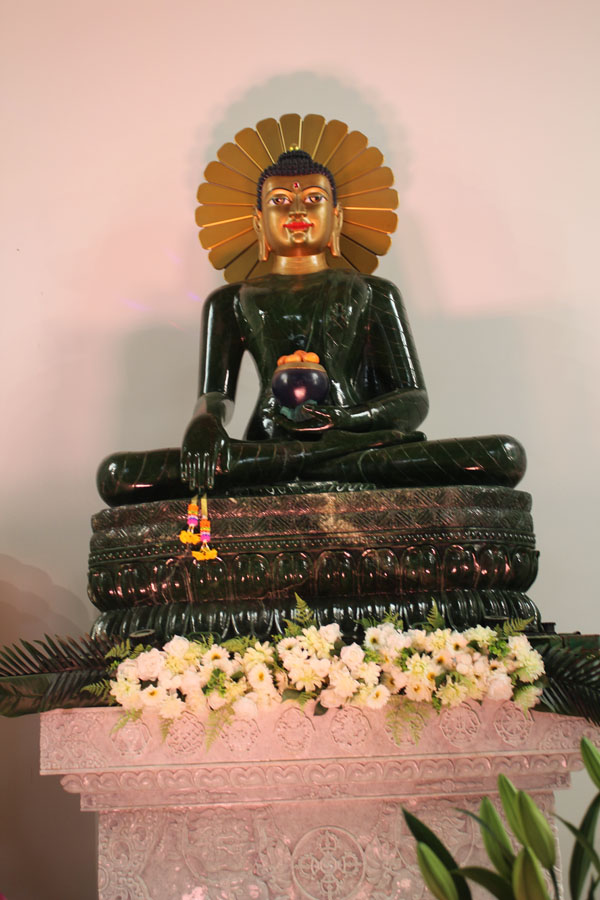 We then got told about their master plan by Kerryn Tibbett. They’re planning to put a whole village on site and go completely off the grid. They’re will be an aged care facility, a school and much more.

One of the projects is for a public school with dorms because schools from all around Australia will want to visit for a night and they can’t put a heap of kids in a motel.

We got a tour around the Peace Park and saw the Bodhi trees which are the trees that the Buddha meditated under when he reached enlightenment. There were also a lot of statues that represent other faiths such as Catholicism, Sikhism, Islam and Hinduism.

In the peace Park there were also a few interesting quotes and animal sculptures such as elephants and a phoenix type creature resting above a blue pond. 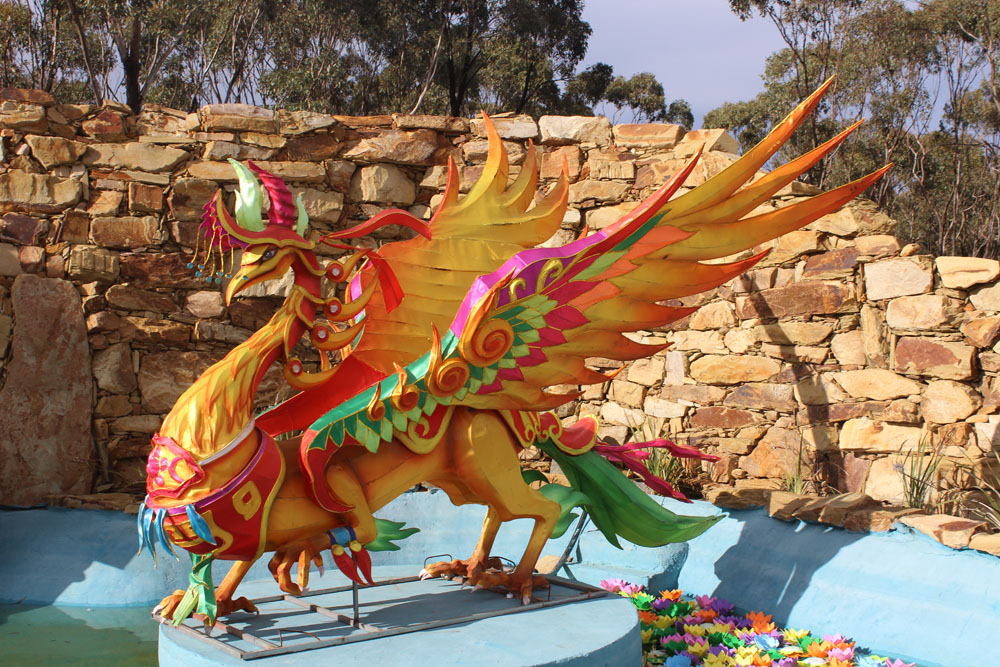 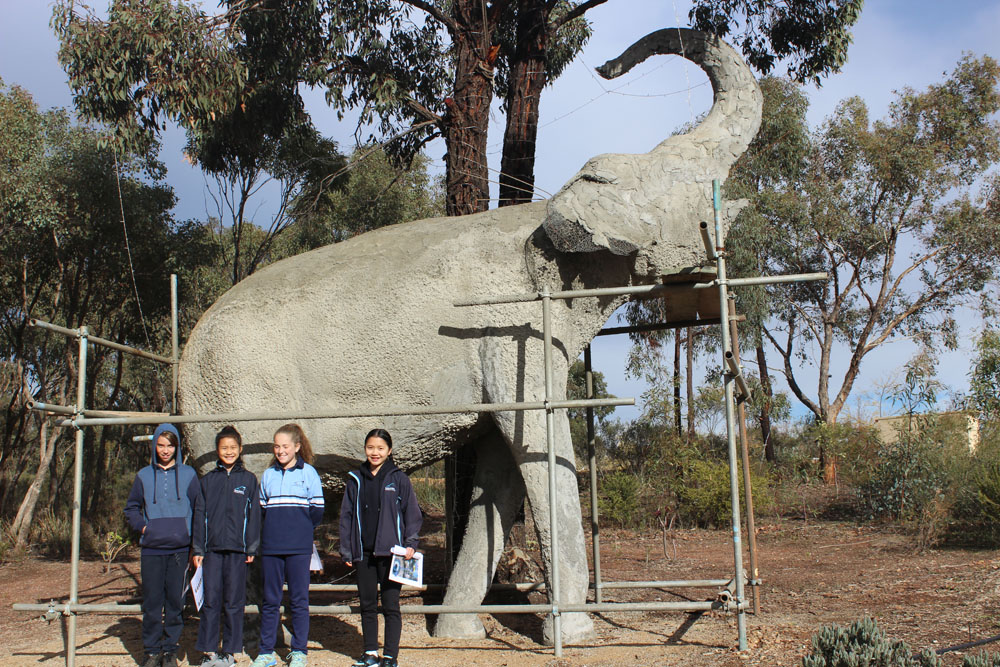 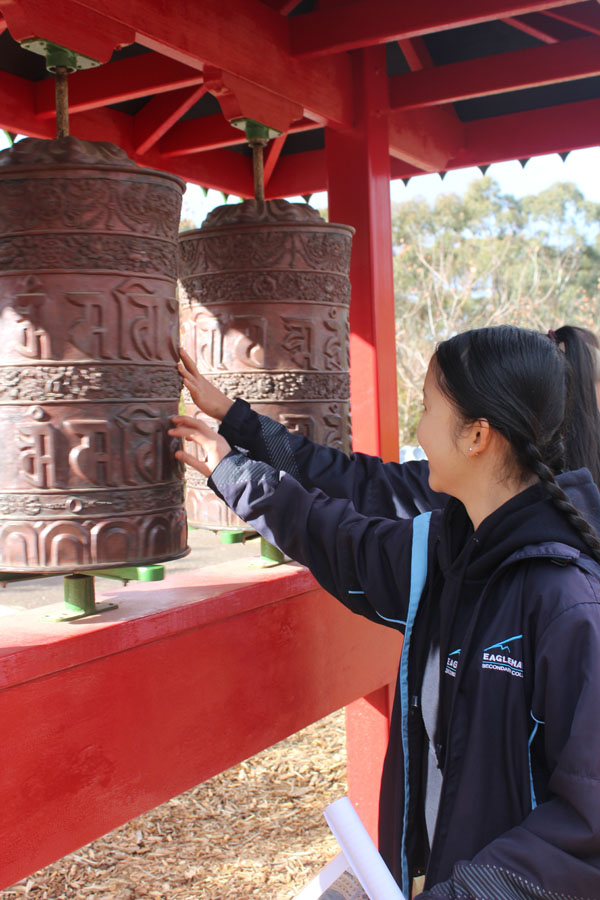 Inside the stupa we got a tour by Kristy McKimmie. We saw the Jade Buddha and two other big statues. There was also the relics collection and holy items. Above the Jade Buddha there is a ceiling mandala painting which is very detailed and beautiful which took two months to paint. 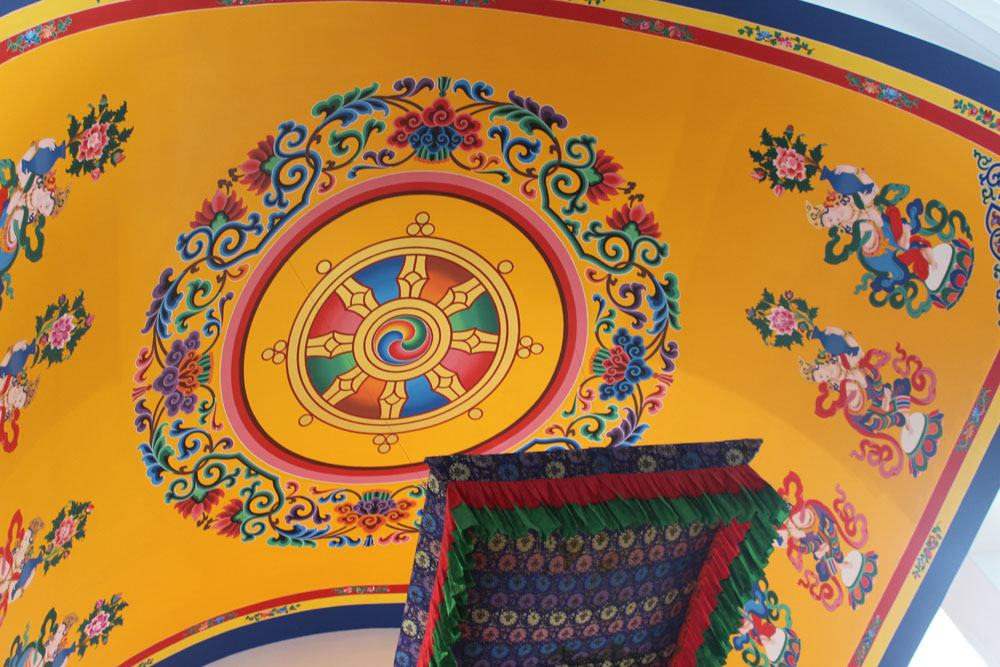 Photo of the intricately detailed ceiling painting above the Jade Buddha.

“I think that the great stupa was a really cool place with lots of interesting things. There was a garden with lots of different statues, the statues were really detailed and colourful but some of them looked a bit scary! My favourite part about the great stupa is the awesome jade Buddha. It was made out of a massive jade gemstone and sits on an alabaster throne.” PEH LA WAH

“The film in the visitor building was really good and informative. We also saw the Jade Halo, which was very cold when you touched it. This is because of the level of iron in it. We walked around the garden and there were some trees that people can write down a prayer or their thoughts on a heart shaped paper and tie it to the tree. The Stupa building was really big, and inside the building there was already some really cool pictures that some Monks have painted, which were very colourful. The Jade Buddha was in there and it was really amazing.” 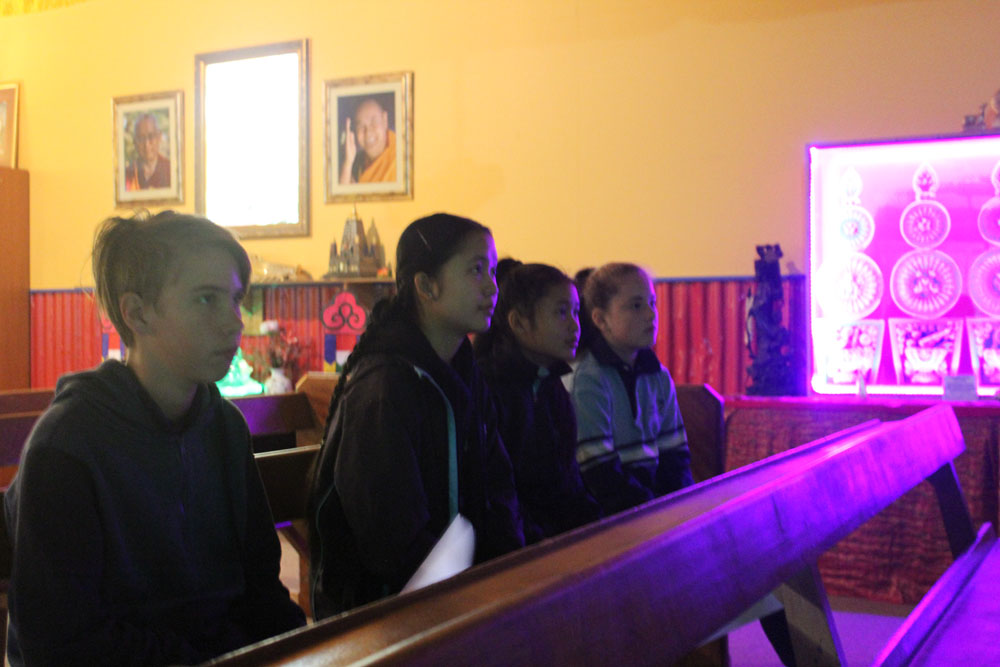